Words are sounds, first; then what do we do to them, to the sounds? Jung thought grief gave human voice to sound. This is the meaning of Norman O. Brown’s “The fall is into language” (Love’s Body, p. 256), though it seems equally plausible that joy, close friend to grief, might also be capable of producing a word or two. Dostoevsky contributes to the modern discussion in “Notes from Underground” with his often quoted “Suffering is the sole origin of consciousness.” If so, the first words uttered by conscious man must have been sounds of pain: Ouch! If you prefer cartoons, a caveman accidentally rolling the stone wheel across his big toe. Joyce spelled it:

Norman O. Brown: “How to be silent. In a dialectical view: silence and speech, these two, are one. Apollonius of Tyana said silence also is a logos. And words do not spoil the silence for those who have ears to hear what is left unsaid” (p. 256). Listen to Ella Fitzgerald scat singing. Instruments reproduce the human voice, first (another reason Cage objected to jazz – and worked with sounds apart from voice). Louis Armstrong thought his trumpet an extension of his voice, and he sings as he plays. What we do to words is similar to what Cage thought we do to sounds in making music (anthropomorphizing sounds we hear in nature). Words give conscious order to sound, allowing for the reproduction of sounds with fidelity, creating self-consciousness through language.

Here’s something recently dug out that might illustrate in a playful way: 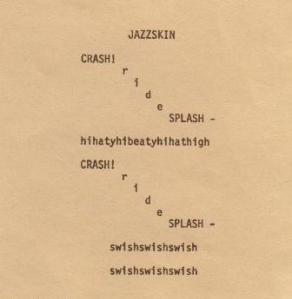 JAZZSKIN was published in the fall 1973, issue 3, of silent quicksand, a magazine published by students of El Camino College.