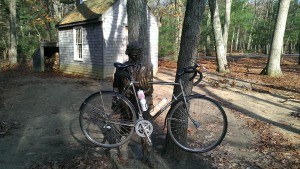 Fall falls. Footfalls squish and squash through redorangeyellow leaves, their green energy sucked back into roots, an understandable hoarding for the winter.

The casual bicyclist dismounts for the season, buries the bike in the basement, perhaps intending to walk through the winter.

We have come to rely on the automobile to our detriment: for cars require a massive infrastructure, costly to build and maintain, that blights the landscape and harms the environment; cars are fuel-hogging inefficient, noisy and polluting, difficult to recycle; car use subtracts from walking opportunities. Even in parking lots we search for the space nearest the entrance, though that distance might be our only walk of the day.

While Thoreau probably knew of the bicycle, he didn’t ride one. If Thoreau wanted or needed to get somewhere, he walked.

In his essay simply titled “Walking,” Thoreau says he wants “to make an extreme statement.” What does an “extreme statement” sound like? “If you are ready to leave father and mother, and brother and sister, and wife and child and friends,” Thoreau says, “and never see them again; if you have paid your debts, and made your will, and settled all your affairs, and are a free man; then you are ready for a walk.” At that pace, few of us would ever be ready or able to go for a walk.

Maybe it’s an argument of definition: what’s a walk? “But the walking of which I speak has nothing in it akin to taking exercise, as it is called…but is itself the enterprise and adventure of the day,” Thoreau says. He tells us, in Walden, he often walked four miles a day, and would walk eight miles to say hello to a tree (“Former Inhabitants” chapter, para. 17).

“I am a good horse to travel but not from choice a roadster,” Thoreau says in “Walking.” I stopped walking when I got my first roadster, a 1956 Chevy. Cars are cool. Who isn’t intoxicated by the odor of a new car’s interior? Today’s cars, souped up with on-board, high-tech falderal, make my old ’56 Chevy seem a bicycle by comparison. To answer Thoreau’s extreme statement about going for a walk, to walk with Thoreau, we would add our cars to his list of things we must be ready to leave and never see again. It’s an argument of revolution.