At a campus library book sale this week I bought for $1.00 a copy of Volume 1, Number 3, of the Evergreen Review. The price new was $1.00 in 1957. It’s a 5 and ¼ by 8 inch paperback, 160 pages. It’s in good condition. There are four black and white photographs, in the middle of the issue, of Jackson Pollock and his studio. Pollock had died in a car wreck the previous year, 1956, on August 11. The opening essay is by Albert Camus, “Reflections on the Guillotine,” an argument against capital punishment (ironic, considering recent events in our own time). Camus says, “As a writer I have always abhorred a certain eagerness to please, and as a man I believe that the repulsive aspects of our condition, if they are inevitable, must be confronted in silence. But since silence, or the casuistry of speech, is now contributing to the support of an abuse that must be reformed, or of a misery that can be relieved, there is no other solution than to speak out, to expose the obscenity hiding beneath our cloak of words” (7). Camus would die, like Pollock also in a car wreck, three years later.

The issue contains poems by William Carlos Williams and Gregory Corso, including Corso’s delightful “This Was My Meal,” and also a prose piece by Beckett, whom Evergreen Review and Grove Press editor Barney Rosset introduced to the US.

I stood at the table of jumbled books at the book sale looking through the issue, wondering what it might have been like to read it new, in 1957 (we didn’t have books in my house yet, and certainly no subscriptions to anything, save the daily newspaper occasionally, and anyway, I was just a kid in 1957, though I might have been on the road, with my parents and sisters, driving to the west coast, around the same time as Kerouac, Corso, and some of the others). 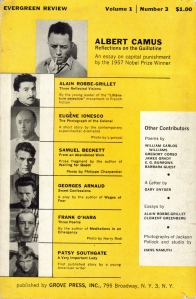 And I wonder what today approximates the Evergreen Review of 1957. In what publication will we find today’s young Robbe-Grillet, or Frank O’Hara? n+1? The Believer? McSweeny’s? Yet Beckett was born in 1906, Ionesco in 1909. Camus died at 46, O’Hara at 40, Pollock at 44. There’s a letter in the Evergreen Review issue from a young Gary Snyder, who was “…do[ing] Zen” in Kyoto. The letter begins with a quote from Snyder’s friend Will Petersen: “You know, we got nothing to worry about.”