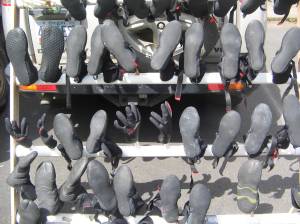 Another summer unfolded like a dirty sock, stiff and hot. Baseball fell to football, and I kicked off the boat shoes. What to put on? If you’re a ballplayer, you may have uncommon shoe choice, as evidenced by reports of a Fall skirmish, in a bar down in Louisiana, which resulted in the police confiscating 49 pairs of shoes belonging to one of the college athletes allegedly involved in the melee. I’m still a surfer at heart, and a minimalist when it comes to shoes, so I look askance at that number, 49, but one must be a barefoot existentialist to throw the first block.

The idea of the shoe is really old. In 2008, archeologists found what is thought to be the oldest surviving leather shoe in Eurasia. The shoe, found stuffed with grass, presumably to maintain its shape during the off-season, was radiocarbon dated to the 4th millennium BC (1). Other types of shoes have been found that are even older, shoes made of fibers, sewn or woven, or made from animal skin, and sandals made with different kinds of technology and apparently for different purposes (2, 3). One study suggests that the idea for the shoe may have come from basketry, the shoe conceived as a basket for the foot, the shoe made with basket weaving technique (4).

An inventory of my own shoes harbors the story out of Louisiana from a sea of hyperbole. Maybe the athlete had never thrown out an old pair – a youthful hoarder of shoes. Still, we might argue that access to more shoes than we need suggests overindulgence, but is this a case of moral relativism? And no doubt athletes are not the only shoe collectors. Besides, in shoes begin responsibilities, to improvise on the Delmore Schwartz theme.

Perhaps my parents tried to prepare me for athletic success requiring extra closet space by ensuring an early shoeful habit, but it seems unlikely. I’ve two old photos in which I appear to be wearing the same formidable Buster Browns, and if my parents were trying to prepare me for anything, they must have been thinking of circus lion taming. In any case, assuming one new pair of shoes per year, I went from shoeless to ten pairs of shoes by the time I reached Little League.

The Buster Browns were worn at Churchill Downs; Little League was a mile from the Pacific. I don’t know how many shoes my parents packed, with everything else they owned, into their Plymouth sedan with their four children for the move out west, and no doubt what shoes we had comforted our Westward Ho! feet, but the adventure must have been riskier for our having no spares in the trunk.

In Little League I preferred sneakers to cleats. I spent three years playing ball for the El Segundo Major League Red Sox. Add another three pairs of shoes, but I’m sure I still owned only one pair at a time, and wore that pair everywhere, to school, church, baseball. I also wore rubber go-aheads, wore them down to the skin of my heels before tossing. Should these be counted as shoes? If so, add a pair every year, from the age of ten, when I started Little League, to 18, when I left home for the Army.

In boot camp, at Fort Bliss, Texas, we were issued two pairs of Army boots, comfortable and substantial, and we wore them for every purpose save the few, formal occasions when we wore our dress greens with low quarters. Add another three pairs of shoes. I wore those same Army boots for six years, in and out of uniform. In barracks, we displayed our surplus shoes on our footlockers at the end of our bunks. The South Central boys displayed their spit shined cowboy boots along with their G. I. shoes. I put out my Jack Purcells, wiping clean the blue stripe.

I left my low quarters in my usher’s locker at the Paradise Theatre one Saturday morning, soon after my military discharge. I had reflected too long on my chore of the day: chipping the gum off the bottoms of all the theatre seats. I couldn’t recall a detail as absurd from my Army experience. I snuck out of the dark theatre into a solid gold South Bay weekend, not my first existential decision, nor my last, wearing my Purcells, leaving my low quarters to an unknown successor, heedless of the shoe choices in my future.

In college and in my early teaching assignments, I wore sneakers or the old Army boots, still wearing well. Few judgments, in those days, seemed shoe-based. It wasn’t until I abandoned teaching for the corporate world that I purchased a pair of wingtips, ignoring Thoreau’s advice to “beware of all enterprises that require new clothes” (5). I wore the wingtips stiffly into the office on my first day, spit shined; I was the only guy in the office wearing wingtips.

Twenty-five years in a carpeted corporate world doesn’t wear out many shoes. Add another six or seven pairs. The story of my corporate career might be told in cordovan loafers, some with tassels, or boat shoes. Add a few golf shoes, slippers under the tree most years, then suddenly some cranky Dr. Martens, shoes I wore in the yard, on walks, and to work; and perhaps it was the insidious Martens that put me on the track to an Indie early-retiree lifestyle. I began to wear, like Eliot’s Prufrock, “the bottoms of my trousers rolled,” but with little regret (6).

So I have owned more than 49 pairs of shoes, but never that many at once. I recently purchased some new Dr. Martens, made in China; my original pair, which I finally wore out, was made in England. One can’t fully appreciate new shoes until one has worn out old ones. For an athlete in sneakers, the shoe precedes the foot, and wearing the shoe out is not the essence of the game. Whatever legal tackles our contemporary athletes end up breaking, no shoes will be worn out, and any thoughts about going existential must wait for the off-season.

Shakespeare’s bumbling Polonius might have offered another aphorism for Laertes’s consideration, though probably not putting the Western world on a new footing: treat each new pair of shoes as your last; perhaps then they might be worn more wisely, and one may more fully realize one’s barefoot potential, for the more shoes we have, the more schemed and distracted our purposes, but the closer we go to barefoot, the more deliberate and sure-footed our steps.