They look like anyone, these poets and writers, intellectuals and artists, editors and publishers – filling and milling about the Oregon Convention Center for AWP19, sauntering though the book fair and scurrying off to panels and readings and private receptions. The fact of a book must say something about their ability to write, to argue and persuade, to think and entertain, to talk and listen. But which one is the one, the seventh poet of a seventh poet, the one who can “make your heart feel glad,” “heal the sick and even raise the dead,” “make your flesh quiver”? You know when you meet the one who thinks they’re the one, but how do you know the one who is the one, “in the whole round world, the only one”?

I met the poet Calliope Michail at the Berfrois table. She has a book out, “Along Mosaic Roads,” (2018, 87 Press, UK). She also appears in “Queen Mob’s Teahouse: Teh Book,” in the form of an interview conducted by the inimitable Vlad Savich. Calliope is refreshingly fresh, able to speak of poetry in clear and concise terms. She gracefully dances around Vlad’s often idiosyncratic questions:

“I think it’s a coy dance with writing. You choose it and it chooses you, but sometimes the feelings aren’t mutual” (126).

She describes with clarity the writing process:

“I tend to see each poem as a pattern. This pattern consists of layers and links, connections to things in various realms – the personal, the political, the aesthetic, the literary, the linguistic and so on. For me, it’s more of a process that may begin with a line, a concept, or some other preoccupation, that then gets built on” (127).

“Along Mosaic Roads” contains five sections, each beginning with a threaded poem, “Standing in the Sun,” Roman numerals I through V following. There are 17 poems in all. The titles of the poems sound like those of classical music tone poems. The book is a movement through time and place and person. Again we find the theme of wandering, “Going.” I’ll be spending more time in Calliope’s book in a later post, after AWP19 and Portland returns to its normal weirdness. 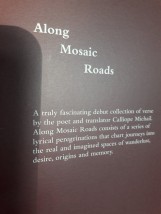 I also met at the Berfrois table veteran poet Dorothy Chan, a 2014 finalist for the Ruth Lilly and Dorothy Sargent Rosenberg Poetry Fellowship. Dorothy has a book just out, “Revenge of the Asian Woman” (Diode Editions, 2019). Dorothy is obviously a capable writer and speaker and advocate for poetry as a means toward understanding one’s place in popular culture and how to take control of a picture others may have of you (probably very different from the picture you have of yourself), as was evidenced in my brief conversation with her amid the distractions at the table, but also as evidenced in her essay written for “Queen Mob’s Teahouse: Teh Book, “Asian Princesses: Fetishisation, Sexiness, Anime Girls and Poetry” (95).

“The very thing that makes you fetishised, such as ‘Asian girl cuteness’ or kawaii fashion can be turned on its head and become a thing of power” (101).

I’ll also be spending more time with “Revenge of the Asian Woman,” in a future post. The essay is erudite, but the theory behind it is very clearly explained.

“I wonder a lot about the way we command ourselves through how we dress, and how these thoughts can be translated to poetry, since fashion is poetry” (98). 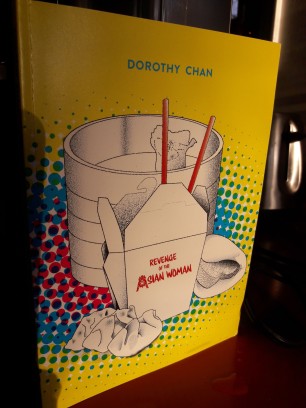 “Revenge of the Asian Woman,” by Dorothy Chan

from left: Dorothy, Russell, and Calliope at the Berfrois table.

This is the seventh in a series with notes on AWP19 and the concurrent publication of the Berfrois and QM’sT books. I’m reading through the Berfrois anthologies this week and commenting on the writing and the conference as the week wears on.