“Ulysses could have done with a good editor,” Roddy Doyle said, fed up with all the attention Joyce gets to the neglect of other Irish writers. “I doubt that any of those people were really moved by it [Ulysses],” Doyle said. Roddy was just stirring up the stew, tossing in some new ingredients, and no need to cook it so long over an open fire. Let’s eat; I’m hungry. But what of Paul Coelho; what’s his beef with Joyce? “Ulysses is pure style. There is nothing there,” Coelho said. We introduced the topic in Monday’s post: must a work “move” the reader to have literary value?

In his On the Sublime, Longinus says, “The effect of elevated language upon an audience is not persuasion but transport. At every time and in every way imposing speech, with the spell it throws over us, prevails over that which aims at persuasion and gratification.”

Yet Longinus also says, “In life nothing can be considered great which it is held great to despise.” But does the reader despise Joyce’s Ulysses for its “pure style”? Longinus said “that is really great which bears a repeated examination, and which it is difficult or rather impossible to withstand, and the memory of which is strong and hard to efface.” Is this true of Ulysses? And, if not, would editing help?

Longinus lists “five principal sources of elevated language:…the power of forming great conceptions…vehement and inspired passion…the due formation of figures, first those of thought and secondly those of expression…noble diction…[and] the fifth cause of elevation…is dignified and elevated composition.”

Can we edit one or more of Longinus’s principal sources of elevated language out of Ulysses and still expect something sublime to emerge?

But what of the idea that for a work of literature to be considered “great” it must “move” the reader? I began thinking of literary works that we might consider great yet don’t move the reader. I selected those works whose design seems to match up to Longinus’s ideas of the sublime and elevated language but also at the same time might, using Doyle’s critical voice as expressed in the Guardian article, have “done with a good editor.” Here’s the list, annotated with wry comments using the “must move to be good” literary critical voice:

1. Moby Dick, by Herman Melville: Edit out all that business about whaling, surely included simply to fatten the thing up, so Melville could boast he had written a big book. But the real problem is, can anyone be moved by the killing of a mad sailor by a vengeful whale? What has this to do with the price of a loaf of bread and a bottle of beer at the local grocery?

2. The Trial, by Franz Kafka: Well, it’s a trial reading it. And who was ever moved by a trial, particularly one that had no ending?

3. Three Novels (Malloy, Malone Dies, and The Unnamable), by Samuel Beckett: Triple play of boredom, the reader thrown out at every base, a runner that never reaches home plate. The work defines constipation, the antithesis of being moved.

4. Gravity’s Rainbow, by Thomas Pynchon: Where are those scissors? 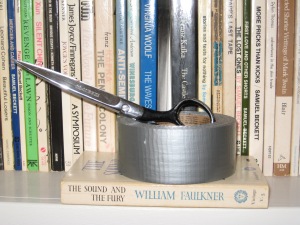 Still, there’s something to the topic that invites comment. What is good? Should a work be considered good simply because it achieves its objectives, even if those objectives lack sentiment and fail to move? Or should we keep looking, for those books that are both “pure style” and contain enough sentiment to be considered moving? How about Faulkner’s The Sound and the Fury?

From Longinus’s On the Sublime, Chapter 1: “As I am writing to you, good friend, who are well versed in literary studies, I feel almost absolved from the necessity of premising at any length that sublimity is a certain distinction and excellence in expression, and that it is from no other source than this that the greatest poets and writers have derived their eminence and gained an immortality of renown. 4. The effect of elevated language upon an audience is not persuasion but transport. At every time and in every way imposing speech, with the spell it throws over us, prevails over that which aims at persuasion and gratification. Our persuasions we can usually control, but the influences of the sublime bring power and irresistible might to bear, and reign supreme over every hearer. Similarly, we see skill in invention, and due order and arrangement of matter, emerging as the hard-won result not of one thing nor of two, but of the whole texture of the composition, whereas Sublimity flashing forth at the right moment scatters everything before it like a thunderbolt, and at once displays the power of the orator in all its plenitude.”

When Huck decides to help Jim at the end of The Adventures of Huckleberry Finn, he really does believe he’ll go to hell for his actions. Yet he’s awakening from a cultured sleep; he’s being reborn. First, he’s accepted the responsibility of a decision; he must act: “I was a-trembling, because I’d got to decide, forever, betwixt two things, and I knowed it. I studied a minute, sort of holding my breath, and then says to myself: ‘All right, then, I’ll go to hell.’” Huck was born into a culture that passed on as a value the idea that to help a runaway slave was a crime and a sin. It’s a culture informed by codes of honor and shame. “It was awful thoughts and awful words, but they was said. And I let them stay said; and never thought no more about reforming.” And at the end of the book, when Huck decides to “light out for the territory,” he’s saying that he ain’t gonna work on Maggie’s farm no more. The orphaned Huck has been born again.

This same sense of honor and shame opens Crossan’s discussion of Mediterranean cultures in his “The Historical Jesus: The Life of a Mediterranean Jewish Peasant. Honor and shame are cultural core values, but more, they become the very persona of the culture: “Honor and shame, then, could be defined as the ideology of small, discrete, and unstable groups competing permanently for basic resources that are attained insecurely and maintained precariously but where conflict must be reluctantly transposed into cooperation for the most precious resource of all, marriageable women” (p. 15). But like Huck, Jesus ain’t gonna work on this Maggie’s farm no more, either. It’s clear that honor and shame, as enculturated values, become emotions enabling control, and one must be born again to escape the enculturated entrapments.

We see both examples come together in Faulkner’s The Sound and the Fury, where the culture described in Huck Finn finally plays itself out, and Quentin’s suicide, prompted, among other things, by his worrying over his sister Caddy’s reputation, will continue forever his argument with his father who has told him that virginity as a value is a man-made tool to control women, the same explanation Crossan argues: “Boys. Men. They lie about it. Because it means less to women, Father said. He said it was men invented virginity not women” (p. 96). But Quentin can’t stomach the irony: “And Father said it’s because you are a virgin: don’t you see? Women are never virgins. Purity is a negative state and therefore contrary to nature. It’s nature is hurting you not Caddy and I said That’s just words and he said So is virginity and I said you dont know. You cant know and he said Yes. On the instant when we come to realise that tragedy is second-hand” (p. 143).

An example of the controls at work can be seen in Joseph Campbell’s “Tales of Love and Marriage,” from his The Power of Myth. We’re now in medieval Catholic culture, where marriages are arranged, but Tristan and Isolde decide they are, absurdly, in love, in romantic love. Isolde’s nurse delivers the warning, but Tristan, too, has had enough of Maggie’s farm: “And if by my death, you mean the eternal punishment in the fires of hell, I accept that, too” (p. 190).

A culture’s core values, what it desires, finds expression not necessarily in ideology but in personality, in the masks individuals wear to get along with their neighbors. The existential decision to be born again shucks the mask. James Joyce leaves Ireland and the oppression of the church’s values of honor and shame, its sanctioned hierarchy of rich and poor, ecclesiastical and secular, its discriminations of right and wrong. And Samuel Beckett ain’t gonna work for the text, no more, ripping off the mask with the inside out eyes, the mask that conditions us to see ourselves as others see us, and to find there outside acceptance and respect. Everyone working on Maggie’s farm must wear the same mask.

How we vote is also probably an enculturated core value. Louis Menand, in “The Unpolitical Animal: How political science understands voters (New Yorker, August 30, 2004), argues that “Voters go into the booth carrying the imprint of the hopes and fears, the prejudices and assumptions of their family, their friends, and their neighbors. For most people, voting may be more meaningful and more understandable as a social act than as a political act.”

“I ain’t gonna work on Maggie’s farm, no more” is an existential decision, like Huck’s, and announces a rebirth, affirming that one’s existence precedes one’s essence, and that one has taken individual responsibility for one’s own essence.

“The danger is in the neatness of identifications,” Beckett said in “Dante…Bruno.Vico..Joyce,” and “literary criticism is not book-keeping.” Perhaps a certain kind of journalism is book-keeping, the kind that embeds meaning in pre-packaged classifications, designations that deprive individuals of their unique character by assigning them to a group, where they are given a number.

I am today more than ever before it seems identified as a Baby Boomer, someone born between the years 1946 and 1964, according to the Atlantic’s Michael Kinsley, in his “The Least We Can Do,” a call for the Boomer generation to satisfy its promise to the country, to redeem its sins of excess by giving back, by paying off the national debt. The call is to behave now like Faulkner’s Isaac in “The Bear,” denying our inheritance, for, after all, no one can own the land, as the housing crisis now teaches. Of course, there’s already not as much land as there once was, our having, like Quentin in Faulkner’s The Sound and the Fury, sold off a portion to pay for our year at Harvard.

We began our retirements at the end of a century of wars that ended in yet another war, a war that Donald Rumsfeld, Secretary of Defense, called, not the least bit wearily, the “first war of the 21st century, implying it would be yet another century of wars: “But really, this is precisely what transformation is about. Here we are in the year 2002, fighting the first war of the 21st century, and the horse cavalry was back and being used, but being used in previously unimaginable ways. It showed that a revolution in military affairs is about more than building new high tech weapons, though that is certainly part of it. It’s also about new ways of thinking, and new ways of fighting.”

“You are a lost generation,” Gertrude Stein told Hemingway, suggesting that the post World War I survivors had been both abandoned and set free by their parents’ great war, the war to end all wars. But twenty years later they would find themselves caught up in another great war, and after that one they would be called the Beat Generation, and beat they were, the Boomers’ parents. Now we are burying the beat, yet the beat goes on. You can’t buy the beat.