The Willamette River flows north through the Valley roughly parallel I-5, and after making the turns near the Falls at Oregon City, moves through Portland before joining the Columbia on its way to the Pacific Ocean, but no worries, this isn’t going to be a geography lesson.

After passing under the Sellwood Bridges (there are two currently, the old one and the new one, side by side), the river wraps around Ross Island, across from the Old Spaghetti Factory’s rococo restaurant – where we met friends last night for dinner before heading up river to the Headlee Mainstage of the Lakewood Center for the Arts, tickets waiting at the Will-call window, to see Spencer Conway play Hugh in a live production of BULLSHOT CRUMMOND: THE EVIL EYE of JABAR and THE INVISIBLE BRIDE of DEATH.

The four of us shared a carafe of house Chianti and ate lasagna, pasta with clam and tomato sauces, fresh oven hot bread, salads and minestrone soup. We sat upstairs, at a booth in the bar area, paying scant attention to the river slooming below about sixty feet to the east. After dinner, we took a short, giddy walk along the river and paused for a few silly, group selfies with the island in the background.

After the short, after dinner walk, we hopped into one car and drove upriver to the theatre and picked up the tickets with still time to lengthen our river walk down to the local historical park to check out the 19th Century iron smelter. 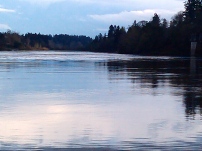 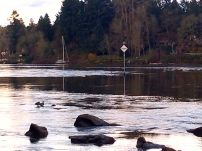 We had seen Spencer Conway a couple of years ago in NOISES OFF at Portland’s downtown Newmark Theatre. All acting is, in a sense, a physical activity, and Spencer excels at employing his entire body in his work. When, for example, as Hugh ‘Bullshot’ Crummond, Spencer is hexed by a magnetic trance and becomes a human magnet, or slips into a parachute prop of sand, or rides the magic carpet, and more, he’s as good at physical acting antics as the great Jerry Lewis. 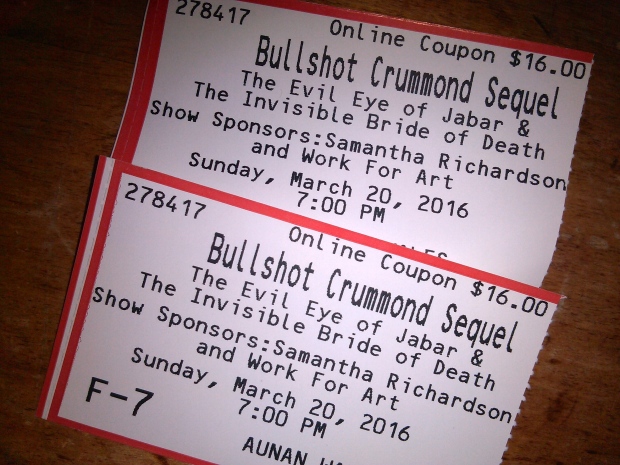 I had not heard of Bullshot before last night. The form is satire, not quite farce, since there are targets – a causal argument of British colonialism reduced to buffoonery via the vehicle of a B movie on stage. Using inventive props in what seemed a record number of scene changes, the cast and production hands succeeded in creating the stage magic that allows the audience to suspend for a couple of hours and float effortlessly down the drama river. Rick Warren was perfectly cast as the evil Otto Von Bruno. Stephanie Heuston and Kelley Stewart each created original replays of B film vixen and heroine. Andrew Harris and Burl Ross filled out the cast, each frequently quick changing costumes to play multiple characters throughout the laugh-out-loud play.