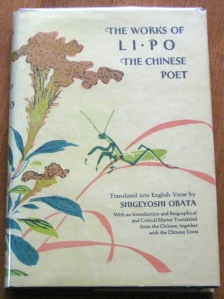 At the Rose City Used Book Fair yesterday, amid a bevy of well organized and decorous book nests, I bought another book of poems by the Chinese poet Li Po. According to the version scanned into Google Books, there were only 1,500 copies printed of the 1922 first edition.

My copy contains a “Note to the Orient Edition,” signed S. O., and dated Tokyo, November 3, 1935. The note reads, in part, “I have resisted the temptation to make revisions for the purpose of forestalling the charge of inaccuracy that may be raised by the Oriental reader. I firmly believe that my methods of translation described in the preface are well-suited to a work of this kind, which is primarily intended not for scholarly exactitude but for the poetic appreciation and enjoyment” (xi).

The note explains the title page, “The Works of Li Po The Chinese Poet: Done Into English Verse By Shigeyoshi Obata.” While the cover of the book reads “Translated into English Verse…” the sub-title on the title page, reading “Done into English Verse…,” suggests a purpose often at odds with scholarly or academic writing about literature. Obata wanted to produce something for reading pleasure. Yet there’s plenty here for the scholarly curious, including biographical notes and a bibliography showing where the reader will find other translations of the poems.

And what a pleasure Li Po is. I’ve been opening pages at random to the poems. Here’s one appropriate for this post, for I plan to read Li Po through our late spring and into summer, when I’ll hang my straw hat on a branch and let the afternoon breeze cool the curls of my hairy mind:

Naked I lie in the green forest of summer….
Too lazy to wave my white feathered fan.
I hang my cap on a crag,
And bare my head to the wind that comes
Blowing through the pine trees.”

The jacket flap of my copy explains that it is “…an unabridged reprint of the famous edition first published in Tokyo in 1935.” I’ve not found an image of my cover in a couple of cursory searches. It’s a hardback, no markings in the book, very good condition, the jacket cover in excellent condition all around. There is a signature in black fountain pen at the top of the map of China that lines the inside cover. The signature reads “Joseph,” but the last name I can’t make out. There are then, in the same black ink fountain pen, three vertically drawn characters in the upper right hand corner, falling between Manchuria and a unified Korea.