Nothing like an Epic Virus to remind one how connections work. Members of this current batch of humans share just about everything of themselves, like it or not, even their money, some more some less than others.

Life swarms with sounds we can’t hear, and teems down pouring itself empty with flying bugs and crawling things, birds and fishes, and the smallest creatures invisible to the naked eye that can make bread rise and turn grapes to wine and hops to beer, life that enters and exits the great smoking and stoking train of the body, riding one car to the next, to and fro, round trips, never holding an official ticket. Life is idiomatic.

In Astra Taylor’s film Examined Life, Kwame Anthony Appiah reflects on how the ways in which humans are connected have changed over time. Gone are the days, Appiah explains, when the only people you ever saw in your entire lifetime were the members of your own family or small tribe:

“As a species that was designed for living in bands of a hundred-odd people for much of its evolutionary history, we have to figure out how we’re going to live in a planet with 6, 7, 8 billion people. Billions not divided into lots of little bands of a hundred, but constantly interacting – and interacting in units of hundreds of millions. The United States, for example, has a population of 300 million right now. So as an American, you exist in this kind of virtual relationship with 300 million people. If you’re lucky enough to be Chinese, your virtual relationships are soon with 1.5 billion people or something like that” (p. 88, Examined Life: Excursions with Contemporary Thinkers, Edited by Astra Taylor, The New Press, 2009; Interviews from the film Examined Life, 2008). 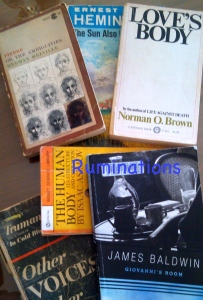 Hamlet, talking to Rosencrantz and Guildenstern: “I could be bounded in a nut shell and count myself a king of infinite space, were it not that I have bad dreams” (Act I, Scene II). Hamlet’s body does not seem to be the problem. Uploading Hamlet’s mind into a supercomputer and dispensing with his body would only make matters worse.

Raffi Khatchadourian, in “The Doomsday Invention,” mentions the scientist and sci-fi writer Isaac Asimov, “who envisioned advanced civilizations inhabited by intelligent robots (each encoded with simple, ethical Laws of Robotics, to prevent it from doing harm)” (New Yorker, 23 Nov 2015, 71). In other words, the robots would be eunuchs.

“Extropianism,” Raffi says, “is a libertarian strain of transhumanism that seeks ‘to direct human evolution,’ hoping to eliminate disease, suffering, even death; the means might be genetic modification, or as yet un­invented nanotechnology, or perhaps dispensing with the body entirely and uploading minds into supercomputers. (As one member noted, ‘Immortality is mathematical, not mystical.’)” (67). So much for immortality. But isn’t eternal youth the goal, a never ending Spring dawn, not to grow old indefinitely, like a wintry universe?

In the conclusion to his study “The Human Body” (1963), Asimov, trying to explain the primary difference and advantage of the human relative to other animals (and other life forms), focused on the number of cells in the human brain (a part of the body he devoted an entire other study to). “The human brain is nothing short of monstrous in size,” Asimov said (309). Monstrous in relative size to the human body, and the human body is no small thing, and, Asimov points out, “a large animal is less the sport of the universe, in many ways, than a small animal is” (308). These are interesting perspectives, to say the least. Will we be able to upload the brain but leave the “bad dreams” behind, in the vacated body? Is the body simply a room for the brain, a room the brain might move out of some day, for new digs? I don’t know if it was Asimov’s idea or his publishers, but the “The Human Body” was kept separate from “The Human Brain.”

Monstrous, too, the harm a brain might bring to its own body, in some attempt to escape, or bring to another, in some attempt to enter, particularly when disguised as a heart. To inhabit another’s brain for purposes of manipulating and exploiting its body, but only for a time, the body a motel room, a rental, a sentence fragment.

Orville Prescott’s January 21, 1948 review of Truman Capote’s first novel, “Other Voices, Other Rooms,” (New York Times) criticizes Capote’s writing for its lack of “narrative clarity”: “Reality for Mr. Capote is not material and specific; it is emotional, poetic, symbolical, filled with sibilant whispering and enigmatic verbal mysteries.” But how else was Capote to tell his story and get it published in the United States in 1948? Capote was not a beatnik.

“Should I get married? Should I be Good?” the Beat poet Gregory Corso ruminates in “Marriage,” his poem that ironically considers the choice between the mores of his time and the impossibility of pretending to be someone he is not. There is only one room he can live in, and it must have poetry written all over its walls.

Or, as Whitman put it in “Song of Myself”:

“Houses and rooms are full of perfumes, the shelves are crowded with perfumes, I breathe the fragrance myself and know it and like it, The distillation would intoxicate me also, but I shall not let it. The atmosphere is not a perfume, it has no taste of the distillation, it is odorless, It is for my mouth forever, I am in love with it, I will go to the bank by the wood and become undisguised and naked, I am mad for it to be in contact with me.”

Another room book is James Baldwin’s “Giovanni’s Room” (1956). The first person narrative concerns David, an American in 1950’s Paris who tries to satisfy a growing disparity between what he thinks he might want and be reasonably satisfied with, unopposed to society’s equivocal mores and arguments, and what he increasingly, as he crosses the existential divide of honest self-knowledge and acceptance, knows he needs.

Where Capote might have deliberately disguised his themes, Baldwin’s style is clear and realistic. Neither the brain nor the body are shrouded in the mystical, but the action is full of compromise, deceit, and betrayal. “Giovanni’s Room” is a rumination on love and unrequited love. How hard is it to love another as yourself if you not only don’t love yourself but grow to abhor yourself? Many men and women have tried it, usually to great disappointment. Baldwin’s David is honest some might say to a fault. He looks for expiation in all the wrong places.

Some of the scenes with dialog in “Giovanni’s Room” emulate Hemingway’s style where what is said best is what is left unsaid, as indeed Baldwin’s characters move in and out of cafes and bars like Le Select, a Jake Barnes of “The Sun Also Rises” old haunt, where Jake might have met them with a smile, and Lady Brett Ashley might have danced with them, the various merry but unhappy groups drinking and carousing through the well-lit but ambiguous Parisian night. Baldwin’s style is generous, almost absurdly gentle in places, beautiful in the way that unabashed beauty might cause pain. Love involves sacrifice. The body is a lamb, the brain a beast. Will machines ever be capable of human love and sacrifice? Wouldn’t the human brain, uploaded into a machine, simply crave a body?