We’re in primary school art class, where the students have been told to draw a picture of a house.

“What’s this?” Missus Portmanteau, Francine’s art teacher, asks, pointing to the big red circle in the sky. “It looks like a big rock is about to fall on your house.”

Francine is nonplussed in the face of a teacher who doesn’t recognize the sun.

“The sun isn’t that big,” Missus Portmanteau says, and enters a note in her red book.

The following week in art class, Francine draws this: 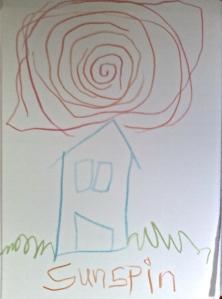 “What’s that?” Missus Portmanteau asks Francine, pointing at the orange and red circles over Francine’s house.

“Your sun is too big, your house too small.”

Francine feels like the rock has fallen on her house.

“Someone is taking a nap,” Francine says.

Missus Portmanteau doesn’t say anything, but she makes a firm mark in her red book with a red pen.

It’s the final art class before summer vacation. Francine’s father has promised a special surprise if her report card looks good. This week, she nails the art project.

Francine has learned that to do good in school and please her father she must conform to her teacher’s view of reality.