Cold. Wet and damp. Dark. Slippery walk in Mt Tabor Park, where the trees appear ready for the winter solstice.

The reservoirs, built with new Portland Cement techniques in the early 1900’s, until recently, held the city’s drinking water. A new, enormous underground tank was built and the reservoirs disconnected. What to do with them now has occupied the community and city planners for the last few years. I’m in favor of building a wave pool, though there’s been no discussion of that idea I’m aware of.

The Oregon Myrtle and Washington Hawthorne are lovely in winter. In California, the myrtle is know as California Bay Laurel. The leaf is like a bay leaf in shape, color, and texture.

A slow walk focusing on the big and small. To the east, Mt Hood dominates the view. Throughout the park, the popcorn bush is popping its white kernels.

Someone built a labyrinth of branches in the grassy opening to the west-side creek valley. Portlanders love to sit out. In the yard at the west-side entrance to the park, two colorful chairs sit empty. 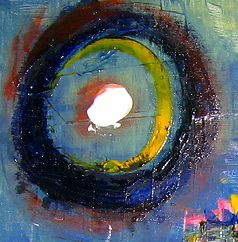 ,
filches off
at a sneaking speed.

The despot rising
declares a natural
state of emergency.

The pompous papa
prays on the instant
for a sum of leniency.

Tonight a summer
full moon calls
a ball of lunacy.

The sun dictates the noon,
casts down dress codes
on the darling horology.

The moon denudes the day.
The night goes without
a blanket of authority. 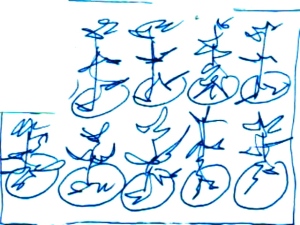 Whiteout on the Whiteboard in Winter

The shadowless man in the center of winter
drew nine snowmen leaving no shadow
on the boardroom wall size whiteboard
and sketched one goal as cold as snow
nine snowmen into one who would wander.
The snowmen started to wonder

Whiteout conditions on the whiteboard
showed a winterland of snowy wonder
how in the wonderland of snow
in a whirling passage of winter
with zero shadow
one will wield wander.

The shadowless man wandered
solo across the clear whiteboard
concealing all shadow
not even a digress to address the wonder
soulful worship of winter
leaving no metric in the snow.

Around and around in the field of snow
the shadowless man wandered
silent on the stage of winter
in a whiteout on a whiteboard
with no edges no wonder
across the field fell no shadow.

no shadow with which to wander
in the snow of the whiteboard
wondering where the nine 8’s went in winter.