I arrived a bit early for my scheduled stint to help out at the Berfrois table at AWP19, so I wandered through a few aisles of tables set up for the book fair. At each table, a couple of usually amiable greeters happily and professionally described the occasion or purpose of their press or otherwise writing or teaching venture. The number of tables was daunting. If 6 was 9 there wouldn’t be time to peruse them all. In the lobby, the wait in the long, long line reminded me of the line for a ride at an amusement park, a long stretch of individuals lined out through the main rotunda, waiting to enter the ticket area, where the line then snaked through numerous switchback turnstile aisles. My friend Bill, who had arrived early, said he’d waited in line for two hours. He voiced his complaint to us at the Berfrois table. As T. S. Eliot might have said, had he not been so gloomy, “I had not thought spring had undone so many.” The sun was out in Portland town. The only way to proceed was at random, psychogeographically. The book fair of course is only one event at any AWP. I enjoyed my short wander, but it was a bit like shopping, which I don’t much care for. Life is subject to change.

One of my favorite stops in the book fair was at the table for the Otis College of Art and Design. The college, its main campus in Westchester, is 100 years old, and is located about a mile from where I attended high school, in Playa del Rey, an unnotable fact I shared with Kyle Fitzpatrick, who I visited with for some time, discussing his school, the books exhibited at his table, and what’s happening in Los Angeles these days. 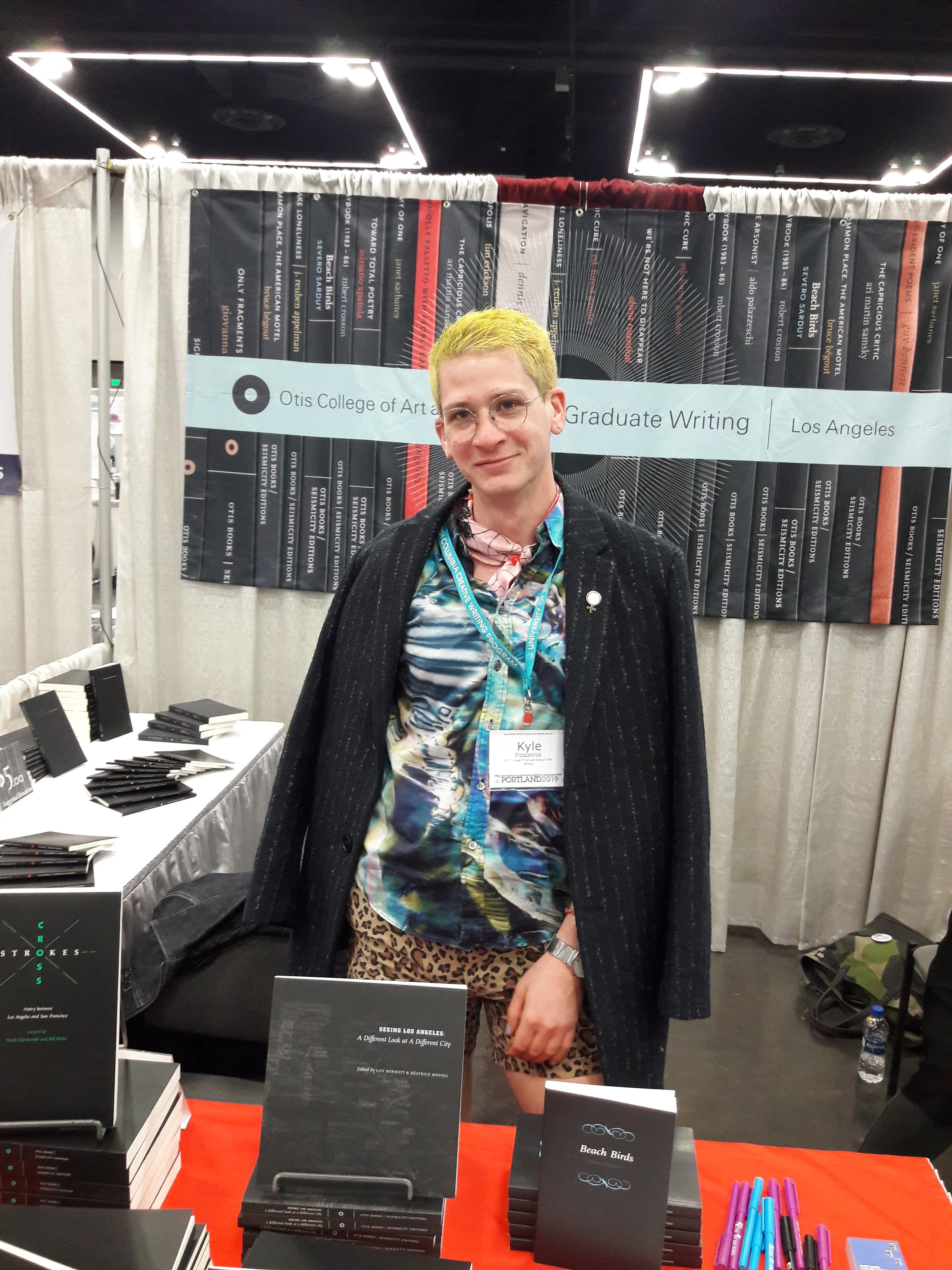 I purchased several of their books: “Seeing Los Angeles: A Different Look at A Different City,” edited by Guy Bennett and Beatrice Mousli; “Swell,” by Noah Ross; and “Proof of Loss,” by Sara Marchant. What sold me on the “Seeing Los Angeles” book was a photo by John Humble, from Shooting L. A., titled “343 Hillcrest Street, El Segundo, May 13, 1995.” My father moved his family to El Segundo the same year the Brooklyn Dodgers announced its move to Los Angeles: 1957. The first house we lived in was at the time one of the oldest in El Segundo, a rental house, an old unpainted wood shingled house, and was located on Hillcrest. It’s of course now long gone, and was located farther north on Hillcrest than the one in the Humble photo. Talking with Kyle, I was reminded of Reyner Banham’s “Los Angeles: The Architecture of Four Ecologies,” now back in print. But I couldn’t recall the title accurately, so there you have it. 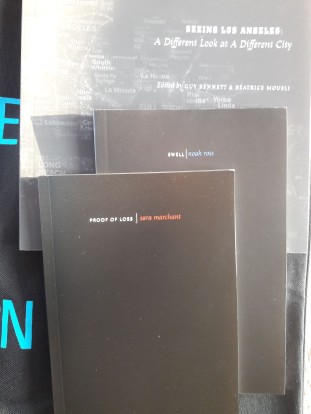 I met Maria Williams-Russell, editor in the Flaneur Walks Pamphlet Series, put out by Shape Nature Press. By now, of course, I had my meme of the day, and could not leave Maria’s table without buying a copy of “Strictly Pedestrian,” by Connolly Ryan. The book begins:

“Like all great walks, this one begins in a park.” 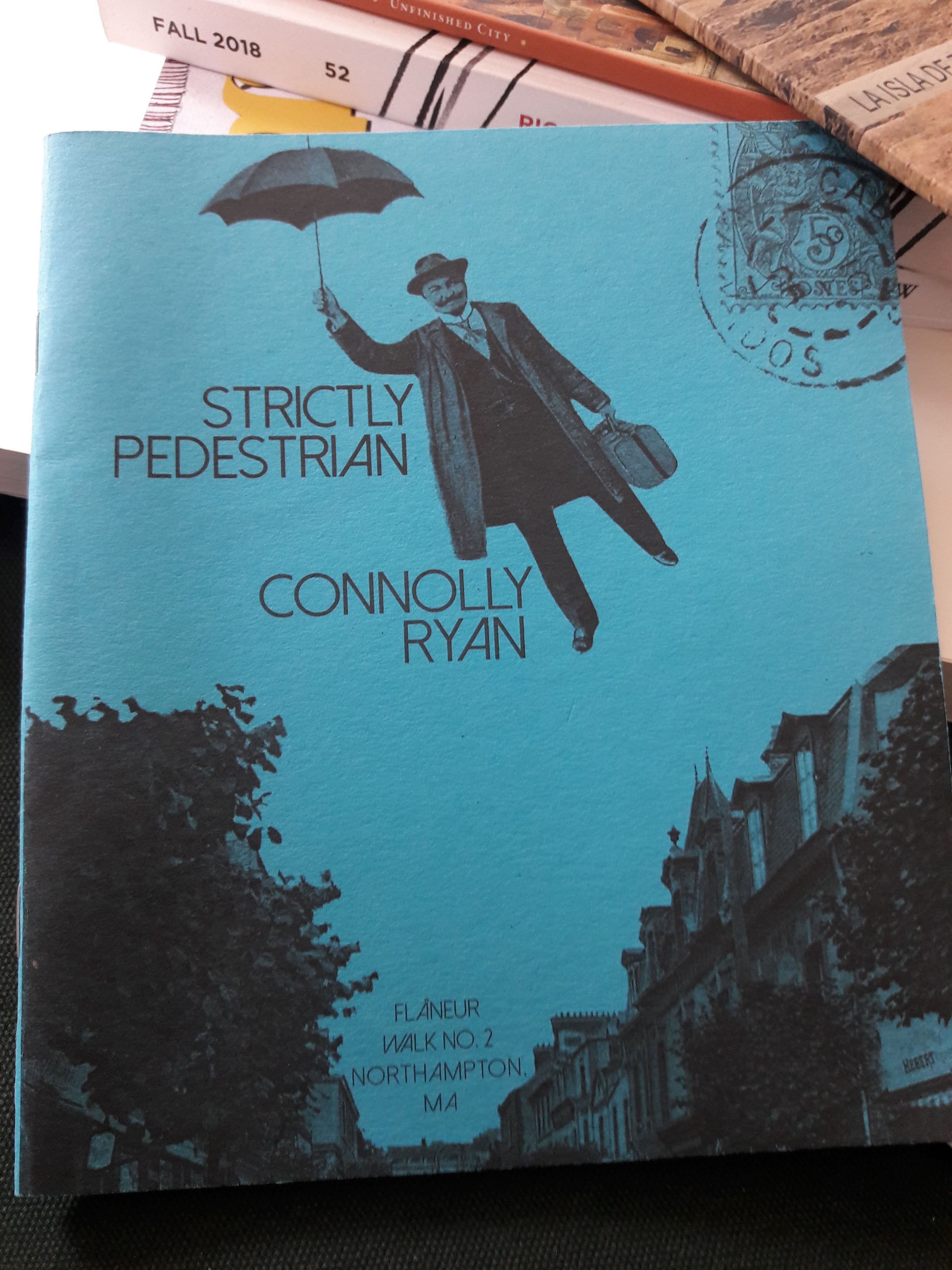 I asked Maria to sign the page with her “Editor’s Note,” and she did, but I could tell she thought the signing a bit silly since she wasn’t the author, and I continued my saunter. 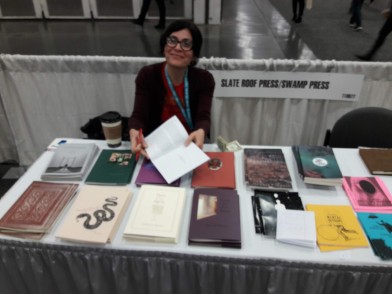 Back in 1969, I found myself miserably in the Army at Fort Bliss, Texas, which is in El Paso. So I stopped at Veliz Books, sharing space with the Rio Grande Review, of the University of Texas at El Paso. From Veliz, I purchased a copy of “La Ilsa De Tu Nombre,” by Gabriela Aguirre. I talked with co-founding editor and publisher of Veliz, Minerva Laveaga Luna. I mentioned my time in El Paso, and talked some about my time at Portland Community College teaching ESL and ENNL in the late 70’s and early 80’s. There was a professor of the bilingual MFA program at the UTEP sharing the booth – unfortunately, I neglected to note his name, and I can’t recall it. He was a good listener, and encouraged me to continue learning Spanish, which I’ve not studied seriously since high school. And they shared with me their hopes for their work, students, and writers. 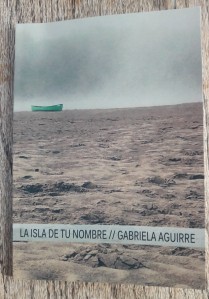 Meanwhile, back at the Berfrois table, editor Russell Bennetts was busy explaining his hopes for his own work and writers. He was able to say hello to a few writers he’d not met in person before, including Robin Richardson, whose one page piece in “Berfrois: The Book,” titled “Stockholm Syndrome,” is a block paragraph with no punctuation marks:

Here is Russell meeting Robin. I’m thinking of giving up trying to write altogether and becoming a photographer (amateur, specializing in cell phone pics). But, as Jimi said:

…to be continued. This is the sixth in a series with notes on AWP19 and the concurrent publication of the Berfrois and QM’sT books. I’m reading through the Berfrois anthologies this week and commenting on the writing and the conference as the week wears on.