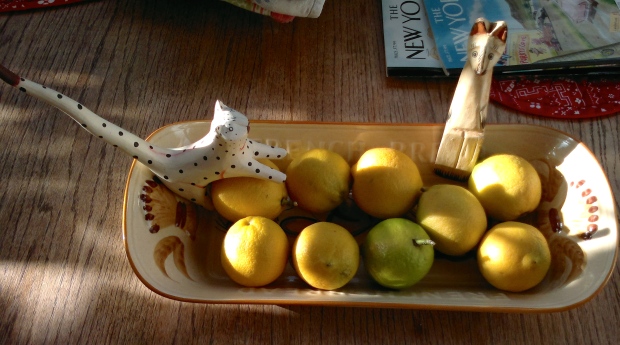 Scamble: Where did these lemons come from?

Cramble: This is the way they play pool in Southern California.

Scamble: I thought they were having a drought.

Cramble: The shooter is called a “Willy.” The Willy takes lime in hand and places it wherever he wants within the dish of billeted lemons, turns around, and pokes the lime at one of the lemons, using the shaft of his stiffened tail as a cue stick, attempting to push the lemon out of the dish, at which point he is awarded another “Willy.” When all of the lemons are in this manner poked out of the dish, the players celebrate with a glass of lemonade.

Scamble: I notice there are nine balls.

Cramble: Yes, this particular game is known as “Nein Ball.”

Scamble: But one of the balls is the lime ball.

Scamble: But if the lime green ball is the cue ball, that leaves only eight balls.

Cramble: Yes, you can also play “Eight Ball.” Most shots are called slop shots. There is no penalty for scratching, as long as you keep your scratching to yourself. If you scratch your opponent, that is called a “Zoe,” and you must put a lemon back in the dish.

Scamble: I never knew pool was so much like poetry.