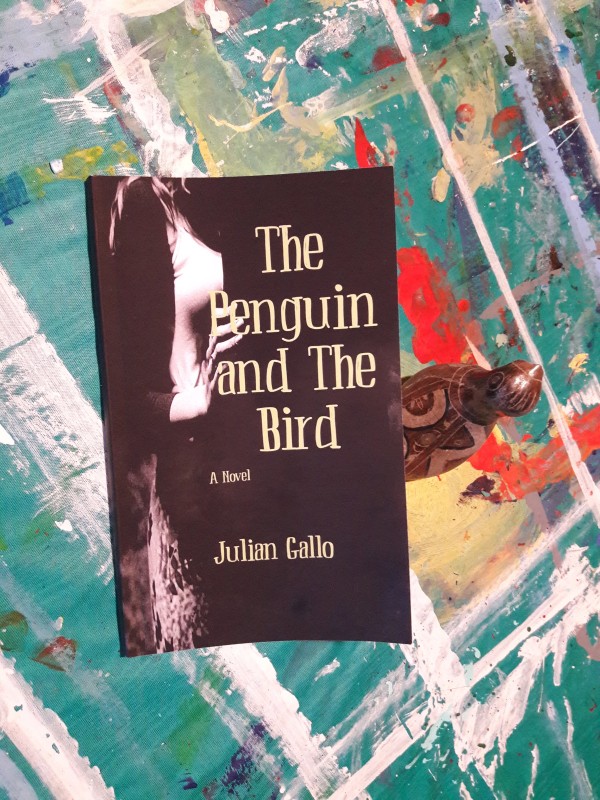 Notes on Julian Gallo’s “The Penguin and The Bird”

Julian Gallo’s “The Penguin and The Bird” (2018, New Horizons Editions) is an impressionistic work. It functions as a graphic novel, but one without the drawings. There are 72 short chapters spread across 122 pages of text. The chapters are organized into four parts: “Her Mother’s Violin Early Autumn, 1979,” which concludes with Chapter 13, subtitled “New York City, Ten Years Later”; the second part is titled “Diamond Street, Brooklyn New York Mid Spring 1989”; the third part is titled “Under Black Light Late Spring-Late Winter, 1990″; and the fourth and final part is titled “The Penguin and The Bird Early Spring, 1991.” These named parts allow for a traditional structure to an otherwise experimental form. Narration shifts from third person omniscient to a second person who seems to be talking both to himself and to someone else, and taken together sometimes seem to merge briefly into a third person plural. Each short chapter functions as a kind of graphic novel thought balloon, but again, without the mechanical drawing. Other characteristics of traditional genres are employed, including plot and character development, the protagonist a dynamic character who changes significantly from beginning to end, and there are traces of noir and mystery genres, Bildungsroman, minimalism, and a kind of anti-writing, a writing that both discovers and develops itself in an improvisational jazz style while at the same time destroying the very expectations it creates, and in that sense the writing is realistic. But the impressions created while reading last, and the novel must be read from an appropriate distance: too close, and the strokes won’t properly merge to create the impressions; too distant, and a reader’s preconceived ideas of what a novel should be will interfere.

The chapters in part one transition in turns from the protagonist, at the time a 13 year old boy trying to write and draw comics, to the antagonist, a Polish immigrant we will come to know as Nadja. They are sixteen years apart in age. They don’t know one another, but they will meet. The narration withholds information; or, rather, the information necessary to follow the plot unfolds to the reader as it does to the protagonist. The opening juxtaposition of the boy’s and Nadja’s situations, their predicaments, reflect the theme we will later see resolved in the last part of the novel, in Chapter 67, where Nadja tells the story about the penguin and the bird, which offers up a traditional meaning for readers who might be in need, while adding another layer to the form’s structure.

Other techniques creating symmetry are employed, and the novel takes on a sophisticated, well-structured form. The language follows the form, beginning with the short, staccato-like sentences of the boy in the beginning, followed by the visceral, sour, and surreal hallucinations of the boy’s, now 23 years old, unrequited, unparalleled, and phantasmagorical fantasies of love and sex in the “Black Light” section. Nadja may be seen as moody, but the temperament of the young man, irrational and even non-rational, his complaints, editorial asides, and tortuous though short monologues, become increasingly angry, fearful, bitter, cynical. At times, the reader may feel like the episodes are being written from Desolation Row. But the writing appears to reflect the costs or risks involved for these characters. These middle chapters are written in a kind of diarist form, self-castigating, accusing, questioning, exploring, wanting, rejecting. This is not a superficial book; its aim is discovery and honesty.

The novel ends in Flushing, New York, the style of the writing returning from the Poe-like intensity of some of the middle chapters to a settling and sober epiphany that is calm and even tender in its resolution, language, and tone. Certain scenes from other parts of the novel are repeated, but with more information now at the disposal of the reader (and protagonist).

The novel’s atmosphere is noir and nouvelle vague. There is a romantic ending, but not of the Hollywood type. While the controlling theme throughout might be love, the love theme also contains naiveté awoken and the coming of age discoveries that dispel fantasy, or at least mixes it with frustration. We see a love turn to rage as love’s perfection is seen as unattainable, unrequited, even viewed as abuse. Metaphor is used throughout to create these impressions. Because of the aphoristic style of the many short chapters, the reader begins to realize the creation of an overall rhetorical device, where one is reminded of details that did not seem all that detailed to begin with. This is another technique that adds to the impressions. Included in the setting is the Poland background history of Nadja and Lena (a foil character if there ever was one). Repetition is another rhetorical device effectively used throughout the novel, in places both in terms of plot presentation and in sentence structure. The language always follows the feeling.

There is an air of intellectualism that blows lightly over parts of the novel, exhibited by often obscure literary and popular references, and the primary characters are made interesting in part by their intellectual pursuits of, or involvement in, culture, but they are not academic intellectuals, which makes them even more interesting. They may not be even necessarily accurate in every reference, but their predicaments are alive with feeling and emotion, with comprehension coupled with lack of understanding that results in a realistic depiction of the human in love and in fear. That depiction also gives them a realistic bohemian character, an avant-garde spirit often it seems forced upon the immigrant. They have lived as well as read about their literary adventure. That life contains so much irony is another of the novel’s themes. There is also much that is witty and sarcastic, sharp and soft, in the writing. Nadja’s meeting the parents after the tryst is an example of such a scene. Though they may all maintain their “little secrets,” it’s hard to keep private in a novel.

Julian Gallo is a prolific writer, but this is the first of his twelve novels I’ve read. I’ve read a few of his shorter pieces online. “The Penguin and The Bird” is a well-designed paperback, its format of short chapters natural and contemporary for today’s online habituated readers. The mix of literary and popular culture also seems a strategic choice for marketing a novel these days. There are references to The Kinks and to The Sundays. The many references to other writers will provide readers potential reading and listening lists, Vonnegut, for example, though when our hero meets Lena, he seems to have been a bit distracted from his Mr. Rosewater, or maybe I missed a gender bender jab there? In any case, the novel may be said to borrow its short chapter format from some Vonnegut examples, also its distancing, and there’s mention of Konwicki, and Cortazar, not to mention the French Sinatra, Aznavour.

I very much enjoyed reading Julian Gallo’s “The Penguin and The Bird.” Its range is wide, from what might be called the sentimental to the gritty and uncompromising.

For more on Julian Gallo, readers may refer to his website at www.juliangalloo66.blogspot.com