A recent Catalyst project, discussed in the HBR Blog Network post “New Research Busts Myths About the Gender Gap,” calls for action within the MBA corporate community. No one doubts that women’s experience in the workplace has woefully lacked what men have been given; but one Catalyst report, “Pipeline’s Broken Promise,” dispels the generally accepted causes (pipeline, motherhood, choice, mentoring), explanations that have led to disinformation and stagnation. But what are the reasons for continued male-female career disparity, then? How can we change effects if we don’t know the causes? Maybe we don’t need to know the causes – the correlations are enough to warrant action to produce change. But the Catalyst assumption seems to argue that inattention, inaction, and naïve or disingenuous acceptance of the popular explanations all amount to an actionable cause, a controllable root cause, to use some MBO lingo. A major MBO assertion is that we can’t change what we can’t control – ergo the drive to get control. Another Catalyst report, “The Myth of the Ideal Worker: Does Doing the Right Things Really Get Women Ahead?,” illustrates, simply put, the obvious, that women are different than men, and that women should not expect equal treatment and experience when exercising the same strategies as men use to get ahead.

But Catalyst is talking about a narrowly defined community – the study is of MBA’s, female and male, and of their various experiences and reflections on that experience. But is success a possession, and, if so, can the possession be enjoyed if it needs one’s 7×24 protection? But proximate causes can have long tails, and the problem of the gender success gap is systemic; the Equal Pay Act of 1963 is as old or older than the cohorts studied. But those outside the community of MBA’s might fairly ask what changes an increase to parity of women to men in the workplace might bring. Why should an outsider care if the CEO is a male or a female? Why should the disenfranchised, the marginalized, the unemployed, the poor, the homeless, the Norma Raes of the world, believe that MBA-women, given the opportunity, will bring some improved economic balance to more than their own cohort?

Will female-male parity in the workplace find homes for homeless families? Will parity help eliminate torture? (Readers might ask how this is relevant, but we are talking about global corporations with the lobbying arms of blacksmiths.) But closer to home, will parity solve the health care crisis? A recent report by the US Census Bureau, “Income, Poverty, and Health Insurance Coverage in the United States: 2010,” highlights the current female-to-male earnings ratio, but posts even more alarming updates, including “approximately 31.6 percent of the population had at least one spell of poverty lasting 2 or more months during the 4-year period from 2004 to 2007,” and “in 2009, 26.1 percent of all people experienced at least 1 month without health insurance coverage.”

Catalyst’s “Pipeline’s Broken Promise” report concludes, explicitly, that power and responsibility in the corporate world belong to men, and there are few signs that current initiatives to achieve parity for women will be successful. Implicitly, this means that to men go the spoils and the accountability. The recent financial crisis shows what the men have done with the spoils and how they have shirked their accountability. The question remains: what will be done with the spoils and how might accountability improve financial results in the general civic community if women had parity with men in terms of income, job advancement, CEO and board positions – in short, career success and career satisfaction?

Yet another Catalyst report provides a persuasive answer to this question. In “Gender and Corporate Social Responsibility: It’s A Matter of Sustainability,” the authors show that corporations with greater female to male parity do serve both themselves and their communities more profitably than organizations with less or no parity. The report suggests serious implications for well-being measurements of both businesses and communities. The concept of corporate goodwill capital is not new, but given the current ills in society and the marketplace, firms would benefit from long-term proactive solutions that would bring parity to female-male workplace experience that would provide benefits to both the firm and the communities in which it operates.

Support for a positive answer to the question of what women will do with the spoils and accountability might also be found in another source, one outside of the business community. Are women different from men in substantive ways that would make a difference in financial corporate results? But the question must be further refined: are female MBA’s different from their male counterparts? The question is a difficult one for Catalyst to answer, for in an effort to dispel the disparity, the answer must be no; but if the answer is no, then what’s the response to the disenfranchised who would ask what difference achieving parity makes? In “Feminist Perspectives on Power” (Stanford Encyclopedia of Philosophy), Amy Allen argues that women understand and use power in substantively different ways than men understand and use power. The net effect of this different view and handling of power is that women use power to help others rather than to oppress or combat with others. Transferred to the corporate world, this would mean that women should not view business as a survival of the fittest battlefield but as a cooperative opportunity to empower themselves, their firm, and their communities. In Section 4 of her essay, sub-titled “Power as Empowerment,” Allen says, “Most of the feminists who embrace this transformative or empowerment-based conception of power explicitly define it as an ability or capacity and present it as an alternative to putatively masculine notions of power-over.” Allen references to persuasive effect French feminist philosopher Luce Irigaray, and concludes, “some feminists interpret Irigaray’s work on sexual difference as suggesting an alternative conception of power as transformative, a conception that is grounded in a specifically feminine economy.” What this means for the woman MBA who aspires toward control, spoils, and accountability, and given her current inability to satisfy her aspirations, is to turn away not only from the male strategies for achievement, but to vow that, once she achieves full parity, she will work toward changing the meaning and use of power in the corporate world, a change that would improve both top and bottom line results and change the corporate system, for otherwise, she will simply have become a man, succumbed to his power by marrying into it, a marriage that will still be unequal, for by becoming him, she will have denied herself, and in denying herself, she will have lost the chance to achieve parity with her community.

The women’s glass ceiling, that invisible, clandestine barrier that separates any upper economic echelon of men from their connected but not equal women counterparts, apparently extends to guitar playing, as evidenced by the latest Rolling Stone list, “The 100 Greatest Guitarists of All Time” (Issue 1145: Dec. 8, 2011). There are only two female guitarists on the list, Joni Mitchell (# 75), and Bonnie Raitt (# 89). Joni Mitchell was # 72 in the 2003 RS draft, Joan Jett # 87 (Jett didn’t make the 2011 cut). Lists, of course, are made for argument, so why aren’t there more women guitarists on the list?

But it should come as no surprise to find that one woman’s floor is not another man’s ceiling, for the disparity in nearly every correlation shows women living on floors far below men in the economic castle. The gender income gap has narrowed in recent years, according to US Census data (see chart), but the disparity that still exists can no longer be attributed to causes like the so-called pipeline factor (that women MBA’s, e.g., relatively new cohorts, need more time to assimilate into the system): 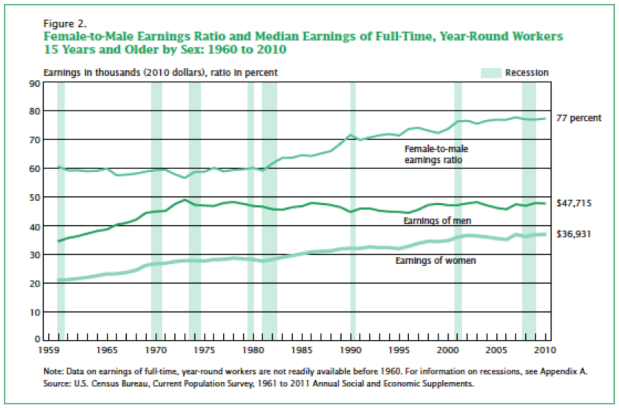 A recent study in Catalyst dispels the pipeline and other myths that would explain male-female, gender-income disparity. Worse, the Catalyst study shows that playing louder, faster, or more power chords isn’t likely to increase the struggling female guitarist’s chances to enter the ranks of the top 100. According to the Catalyst study, women fall behind men in job advancement regardless of what promotional strategies the woman employs. In other words, these are women who know how to play the game, but playing the same chords as the men play doesn’t seem to garner the same audience. A 2010 Catalyst census shows that 92% of Fortune 500 company top earners are men, and only 14% of women are executive officers. So what’s a poor girl to do? To make matters worse yet, the Atlantic on-line just posted that “68% of the sons of the top 1% work at their Dad’s company.” The Atlantic post links to a recent study, “The Intergenerational Transmission of Employers,” and a blog post by Miles Corak, one of the study’s authors. Says Corak, of the elite nepotism, one with harmful potential, in the conclusion to his blog post: “If the rich leverage economic power to gain political power they can also skew broader public policy choices—from the tax system to the education system—to the benefit of their offspring. This will surely start eroding the belief that labour markets are fair, and that anyone can aspire to the top.”

And the ladies were not the only slighted guitarists omitted from the RS list. We would be remiss if we did not augment the argument with some of our favorite male guitarist no-shows: Gabor Szabo, Bill Frisell, John Williams, Leo Brouwer, Herb Ellis, David Rawlings, Leo Kottke.

No doubt you have your own greatest list: “God bless the child that’s got his own.”

Related: Women Under the Glass Ceiling: Parity and Power in the Pipeline