Our review of our recent Stones experience, “Satisfactus: ‘Charlie is My Darling,'” has been picked up by Berfrois.

Ruby on over there this fine Tuesday and check it out, but still I’m gonna miss you. Get hep, at Berfrois.

The new, old Rolling Stones film, “Charlie Is My Darling,” played at Portland’s Hollywood Theatre this past weekend, and we joined a mellow crowd of folks carrying beers and popcorn into the main auditorium, most of us probably able to claim that we had been raised on the Stones.

The Rolling Stones of 1965 were born before the outcome of World War II was certain. Mick was born the week of Operation Gomorra, the Allied bombing of Hamburg, Germany, the firestorm that literally sucked all the oxygen from the air, killing 40,000, injuring another 40,000. Keith was born that December, the week Eisenhower was named the Supreme Allied Commander in Europe.

Time was on their side, and ours too, as we settled into the revamped seats to view the revamped film. But time for what? One thing that seems to have died in the war was the notion of patrimony, if only temporarily and sporadically, that one might be born with guarantees, warranties. In its place would come a new wave of egalitarianism. It bartered with time, but still, what to do with it? Over in France, the question was considered existential, but for the Stones of “Charlie Is My Darling,” touring Ireland in September of 1965, the question hardly seems to have created a crisis.

“I am not a musician,” Charlie Watts, the drummer, and Bill Wyman, the bassist, both insist. But that’s a simple argument of definition, for what is a musician? They certainly were not musicians in the sense of the classical pieces tied to their seats in a symphony orchestra. But “I just play music” is the rejoinder of the actor, the musician who takes the stage in front of an audience wanting to feel real time, feel alive and in motion. Thus Mick says he’s acting. Music becomes an act, and part of the act is the audience. There’s a scene in the film when a small crowd takes the stage, and an Irish boy grabs Mick’s microphone stand and takes the helm. But he’s not acting, or is he? It’s today a funny scene, full of dramatic irony, for we know what they don’t. It seems almost staged, improvised, but expected, at the same time. What does the audience want, the Stones are asked. To get close, to touch, to be part of the moment. To be in time with the band.

Time is tight, sometimes, but as time goes by, we don’t always feel so constricted, but nor do we feel time “creeping in [its] petty pace,” taking its leisurely time, but still we feel we’ve time “to wonder, “Do I dare?” and, “Do I dare?,” and time to wonder if blogging isn’t such a waste of time, but time can be impatient with us, or we with time, like the bartender in Eliot’s “The Waste Land,” who simply wants to go home, and calls out repeatedly: “HURRY UP PLEASE ITS TIME.” 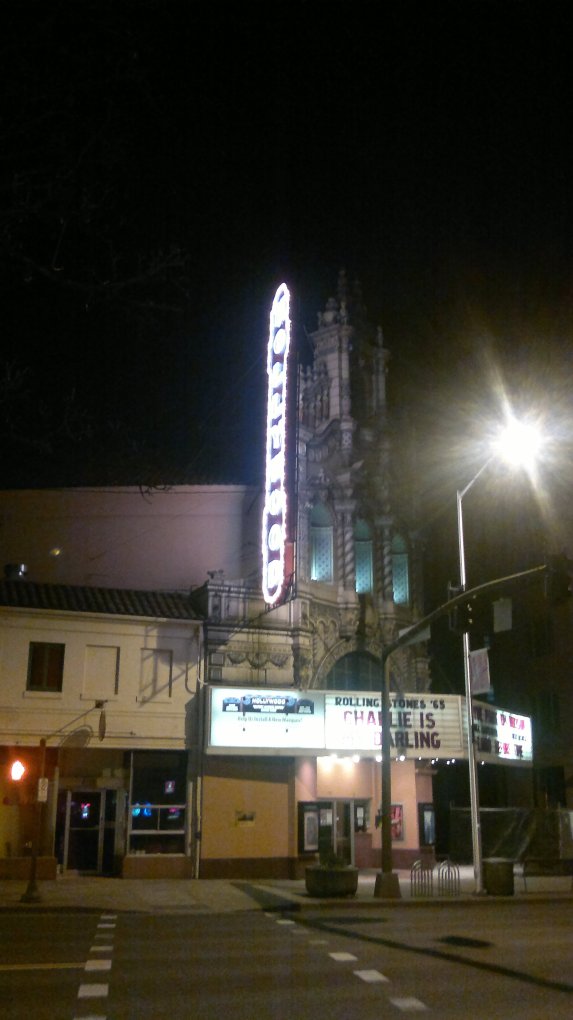 Time is real. What to do? Rock around the clock.

The film release comes in time for the Stones 50th anniversary year. It would be fine if their 50th anniversary tour gigs were as simple as the ones in “Charlie Is My Darling,” the stages low and thin, the instruments and amplification unhyped, the audience small and close, the band members close to one another, no catwalk for Mick’s jagged moves, playing venues like The Hollywood Theatre.

Alas, too much time has passed, and with it, too much innocence.

In the film, though 1965 does not seem like some ancient time, one is startled to see how young the Stones look and how old things seem. They travel by train, and the camera captures some splendid Irish countryside. When they do fly, it’s in a prop plane. The audiences are young, of course, but casual and quick interviews with bystanders show they were well-known, if not popular with everyone. There’s a fun and impressive scene where sequestered in a small hotel room with a piano Mick and Keith imitate Elvis and Fats Domino. Charlie pounds a bit on the piano, too. They had all gone to school on this stuff. And there’s another instructive scene where Mick and Keith are shown making up a song, the others following the process, getting it as they go – yeah, not musicians, though; they just make up songs. Mick downplays the lyrics and intellectualizing any of it. Maybe, but this too is all part of the act. What is their audience not satisfied with, Mick’s asked. Being controlled by the older generation, he says. And why do they feel that way? Because they’re dissatisfied with it.

The thin stages, the notable riffs, Mick’s antic catlike, moody body language, the minimal amplification and Charlie’s simple drum kit, were all easily enough to activate and satisfy the audience’s rock and roll impulse, both in the film and in the Hollywood Theatre. This could be the last time. Every time, any time.

What to do, and why not a few songs, an hour upon the stage, or in front of the stage, or, years gone by, in an old movie theatre? Susan sat next to me, I could hear her softly singing, and I could feel her chair rocking.