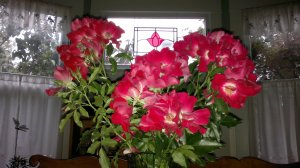 If you’re thinking about figurative language (and who isn’t?), you’ve probably bumped your head on the thought words have meaning, but whose? And too much meaning for their own good, or ours. We pick words like bananas, firm but yellow, not too green, ready to eat. We try to narrow our meaning, so as not to be misunderstood. Ambiguity is not valued in certain kinds of communication, but confusion is hard to avoid because readers puzzle over variations in a word’s meaning, and may disagree or simply read differently the meaning or significance of even the simplest of words.

It’s hard to stop words from connoting, from loitering. Words hang about, and we’re unsure what they’re going to mean next. Words are two-faced, and when you talk out of both sides of your mouth, you’re really asking for trouble. Denote this, literally, as if we are running our tongue around an auricle. The connotative meaning of a word is its suggestive, associative meaning, definitions farther down the word’s trough in the dictionary, the entry to the word corral. You might find a connection in its etymology between a word’s denotative and connotative meaning. The suggestive meaning of a word might include a cultural, technical, auditory, or personal source. Connotative meanings may be widespread and commonly understood, or limited to idiomatic or idiosyncratic inflections understood by only a few.

Try on, for example, the word red, the color, one of the three primary colors, located on the color wheel between orange and purple. What are some connotative meanings of the word red? Ideas, emotions, or things we might associate with red: shame, fear, or embarrassment; danger, risk, or emergency; love, passion, or temperature; emotion, anger, or temper; communism, US Republican states, or wine; blood, sacrifice, or courage; prostitution, fast cars, or valentines. Of course we think context is also a kind of corral, but its fences are weak.

Figurative language involves more than connotative meanings, but the difference between denotation and connotation provides an effective illustration of the difference between literal and figurative language, and since one of the characteristics of literature is the conspicuous use of figurative language, an early awareness that words may mean more than we want them to mean is useful. At the same time, literature involves more than the use of figurative language. Flaubert is very much interested in literal meaning and in literal descriptions. A Simple Heart might be described as a realistic portrait. But when Flaubert describes Felicite early in the novella, she is said to wear a red dress all through the year. A perspicacious reader may ask why a red dress? Why not a blue or green or white dress?

The narrator of “The Custom House” introductory chapter of Nathaniel Hawthorne’s novel The Scarlet Letter seems to be a perspicacious reader:

But the object that most drew my attention, in the mysterious package, was a certain affair of fine red cloth, much worn and faded. There were traces about it of gold embroidery, which, however, was greatly frayed and defaced; so that none, or very little, of the glitter was left. It had been wrought, as was easy to perceive, with wonderful skill of needlework; and the stitch (as I am assured by ladies conversant with such mysteries) gives evidence of a now forgotten art, not to be recovered even by the process of picking out the threads. This rag of scarlet cloth, — for time and wear and a sacrilegious moth had reduced it to little other than a rag, — on careful examination, assumed the shape of a letter. It was the capital letter A. By an accurate measurement, each limb proved to be precisely three inches and a quarter in length. It had been intended, there could be no doubt, as an ornamental article of dress; but how it was to be worn, or what rank, honor, and dignity, in by-past times, were  signified by it, was a riddle which (so evanescent are the fashions of the world in these particulars) I saw little hope of solving. And yet it strangely interested me. My eyes fastened themselves upon the old scarlet letter, and would not be turned aside. Certainly, there was some deep meaning in it, most worthy of interpretation, and which, as it were, streamed forth from the mystic symbol, subtly communicating itself to my sensibilities, but evading the analysis of my mind.

At first glance, we want nothing past denotative meaning. We get the literal meaning, forget the word, and move on. We don’t even bother rolling the word around in our mouth, tasting it before we swallow a meaning, minding our manners. The sentence got us to where we wanted to go; no need to get out and look under the hood. And we often keep connotative meanings, when we do experience them, to ourselves. And denotative meanings are fairly reliable, often going unchanged for long periods of time, while connotative meanings may change relatively quickly. We might first associate the color red with love, roses, and amorous adventures, but when Stephen Crane titled his novel about the Civil War The Red Badge of Courage, we may safely assume he was thinking the color of red might suggest something more along the lines of fear, blood, violence, and sacrifice. In the earlier parts of the 20th Century, and particularly during the 1950’s in the US, the word red was often used to suggest an association with communism, as in “the Red Scare”; a reference to a “red state” today appears to reverse that connotation. And then there’s true blue, Mary’s color.

For some reason, for Robert Burns, in his poem “A Red, Red Rose,” a single red was inadequate. Why does he repeat the word red in the title and the first line? Does he simply mean a very red rose?

O my Luve is like a red, red rose
That’s newly sprung in June…

For William Blake, in his poem “The Sick Rose,” primary red also seemed inadequate. How might our reaction to the poem change if Blake had said “Of red joy” rather than “Of crimson joy”?

O Rose thou art sick.
The invisible worm,
That flies in the night
In the howling storm:

Has found out thy bed
Of crimson joy:
And his dark secret love
Does thy life destroy.

Is Burns’s rose blushing? Is Blake’s crimson closer to the color of blood than red? How might our reading of Blake’s “The Sick Rose” change if the line read “Of bloody joy”?

Even if we don’t make an effort to think consciously about the effects of words upon our reading experience, connotative meanings influence our comprehension and reaction. It is difficult to avoid the effects of connotation, of suggestive meanings. Remember the effect of the sound of fingernails being scraped on edge across the face of one of the green chalkboards back in grammar school? Words make noise. Noise soothes or grates. Words have texture and color and flavor. Some words are soft, mushy, others strong, firm. We like some words; we dislike others. When we get a bunch of words together we don’t like, we might say poetry, and spit them out. Or there’s been a stampede, words running ruddy and rubescent, out of the corral. But we can always brush away the ruddy gnats and make banana bread.