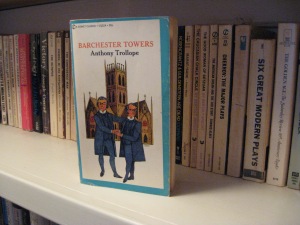 Now here’s a treat; the Pope’s to tweet. The news arrives not by tweet but via the promise of a more social-media engaged Vatican (see the Pope’s message “Truth, Proclamation and Authenticity of Life in the Digital Age,” June 5, 2011), but the tweeting news comes, also, at a moment of alleged intrigue, corruption, and scandal within the Papal Towers. Thomas Jones, editor of the London Review of Books Blog, in a review of a book exposing the Vatican’s seeming scheming culture, summarized that culture thus: “Even if you can’t follow all the tangled threads (and I certainly can’t), the overwhelming impression left by Nuzzi’s book, and the whole Vatileaks saga, is that the Vatican is seething with conspiracy, faction, infighting, self-interest, venality and back-stabbing. (When do they find time to pray?)” (p. 25). Not to mention, when will they find time to tweet?

Anthony Trollope’s Barchester Towers (1857) begins with a question: “In the latter days of July in the year 185––, a most important question was for ten days hourly asked in the cathedral city of Barchester, and answered every hour in various ways—Who was to be the new bishop?” What was the audience for such a question? Today’s Trollope might write: “What will be the Pope’s first tweet?” And the audience would consist of his Twitter followers, who would for the next month or more hourly tweet suggestions for what might be the Pope’s first tweet. Reuters reports the first Papal tweet is not expected for another month or so. I’m not the world’s fastest writer either, but a month to compose 140 characters? No wonder they’re still living in the Middle Ages.

The Pope is not without his critics within the Church. The most notable perhaps is the Catholic priest Hans Kung, who continues to call for changes, though a tweeting Pope is probably not one of them. The Vatican has been trying to censor Kung for some time. Maybe Hans will get his own Twitter account. Martin Luther would have written some choice tweets.

“It will, however, give you no trouble to write another article next week in which we, or some of us, shall be twitted with an unseemly apathy in matters of our vocation,” Trollope’s moderate-right hero of the High Church, Mr. Arabin, tells Eleanor.

But tweets are not articles. Tweets are aphoristic, often sententious, conversational pith. But the Pope won’t be able to qualify his Twitter profile with any kind of disclaimer, even if the tweets are not his own.

And how much less trouble to skip the article for a tweet. The verbose and prolific Trollope would fail the tweet. As he nears the end of his Barchester Towers novel, he worries about fit and about being twitted for his efforts:

“And who can apportion out and dovetail his incidents, dialogues, characters, and descriptive morsels so as to fit them all exactly into 930 pages, without either compressing them unnaturally, or extending them artificially at the end of his labour? Do I not myself know that I am at this moment in want of a dozen pages, and that I am sick with cudgelling my brains to find them? And then, when everything is done, the kindest-hearted critic of them all invariably twits us with the incompetency and lameness of our conclusion. We have either become idle and neglected it, or tedious and overlaboured it. It is insipid or unnatural, overstrained or imbecile. It means nothing, or attempts too much. The last scene of all, as all last scenes we fear must be,