Portlanders love to sit out. At sidewalk cafes, outside pubs, in their yards or drives. On porches, decks, balconies. In parks. On special occasions, neighbors will close their street to cars so they can sit out in the middle of the block at improvised tables in whatever chairs seem to turn up. The atmosphere of a street closed to cars turns surreal in these times. Maybe because it rains six months out of the year, Portlanders don’t take the perfect evening for a sit out for granted, but they’ll even sit out in the rain, huddled beneath coats and blankets around a fire pit or under overhead standing outdoor electric heaters.

The current painting in progress is tentatively titled, “Sitting Out.” It’s 3 feet by 5 feet, stretched canvas. I’ve used acrylics, oils, and oil pastels, applied with brush, palette knife, or directly out of the tube. The grandgirls have been involved in this painting as well. Chloe is responsible for the bottom left, raspberries at the top of a green hill, ZZ for the sky and bottom right umbrella and blue chair seated with a red figure. Layer upon layer. Things get covered up. Sometimes it’s a mistake to cover something over, but you keep working. A canvas of this size is not inexpensive, but we got this one used at a garage sale for $5. We painted over the old painting, but ZZ wanted to keep some existing red roses in the bottom right hand corner, so we tried to preserve those. 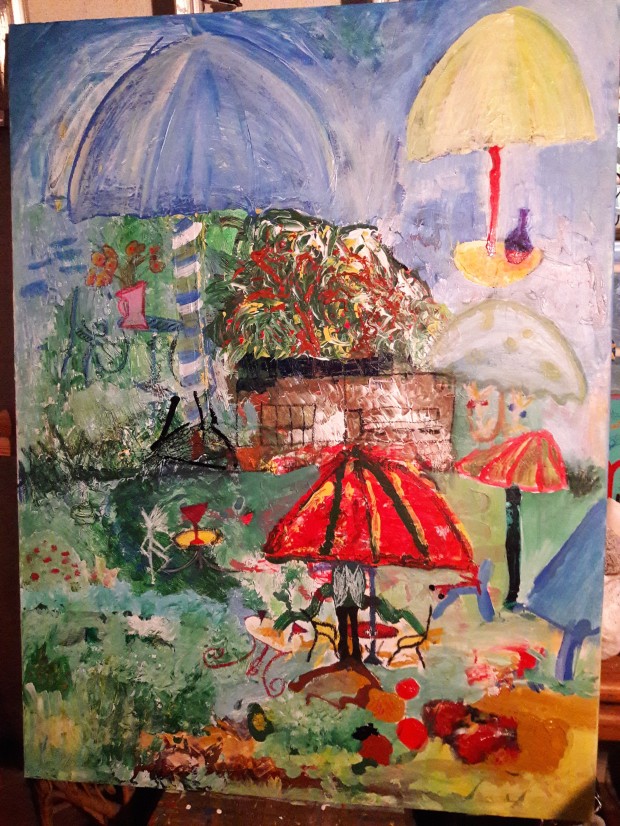 Our studio, such as it is, is located in the basement:

The grandgirls are back in school now, and I’m working on the sit out painting in the basement alone. Last night I added the black umbrella outline with the broken stretchers pointing upward in the middle left. Had the girls been there, they would have booed this change. I need to figure out a way to cover it up without ruining the horizon line below it, which tops Chloe’s field.

Below are two pics of Portlanders sitting out on the sidewalk and in the street corral of a corner restaurant:

And we’ll close with this pic of a sit out zone in an unused portion of a driveway, Ollie waiting patiently to be taken for a ride: