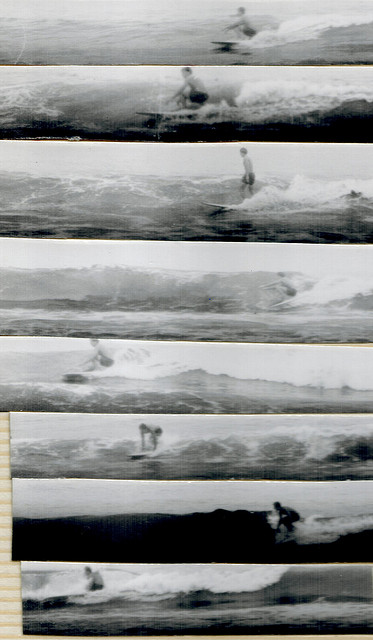 When does a bummer become a hell? For the average surfer, an ocean with no waves is but a bummer of a morning. The lull will pass. Need to pull some maintenance on the surf rig, anyway. But one can’t escape the hell of other surfers when the swell does come in.

“All those little crystals flew behind us in drifting angel trails.”

“We all paused a moment, pictured it. Willie and Vince looked at each other: angel trails . . . metaphor or assertion?”

It’s a good question that’s answered by Duane’s rhetorical decision to write about the real ocean, not a metaphorical one. If a surfer mistakes a wave for something it’s not, someone might drown. “Caught Inside” is a researched book combined with the one year memoir, with appearances by the likes of Richard Henry Dana Jr (“Two Years Before the Mast”) and Ed Ricketts (“Between Pacific Tides,” “Cannery Row,” “The Log from the Sea of Cortez”). These by writers who almost never took something for what it was not, but catalogued and described in terms of scientific method – observing objectively, identifying, naming. And Duane is good at following suit. He’s interested in local observation, behavior, and faithful reporting:

“…and John Steinbeck intentionally socks it to Ricketts with a moral about those who would romanticize the wild: ‘Here a crab tears a leg from his brother . . . Then the creeping murderer, the octopus, steals out, slowly, moving like a grey mist, pretending to be a bit of weed, now a rock, now a lump of decaying meat while its evil goat eyes watch coldly.’ It’s Melville’s universal cannibalism of the sea, where Ricketts sees in the horror of the glassed-over pool a ‘lovely, colored world” – tide pool as evasive simulacrum” (230).

Nor does the shark pull on a pair of Hang Ten trunks before drifting with the tide toward a breakfast of those yummy looking frog legs dangling off that funny looking abdomen with its upside-down fin. That’s not a frog. That’s a surfer, and the fin is the skeg of his surfboard.

Alongside the historical beachcombers, Duane populates his book with local surfer aficionados he meets along the surfer’s way, most of whom follow the surfer codes. Surfing, annoyingly, is a social activity (much valuable surfing time is spent driving up and down the coast road searching for a preferred spot where no surfers are already out), which means if we want to be something more than shark bait or flotsam flown against barnacled rocks by an unheralded outsider, we must adhere to standards and conventions of behavior – in the water, up on the beach, and in the stingy community where being a surfer bum is economically and socially a monk’s life. Affordable beach city pads are already extinct in most popular areas, just about anywhere along the 800 mile California coastline, and dedicated surfers, the true aficionados, those who plan on spending every single morning in the waves if not also every single afternoon and evening glass-off, sacrificing relationships, careers, jobs, family, the crab traps of “benefits,” don’t have much time left over to load the 16 tons, even if they wanted to.

How should we spend our time which becomes our lives? Thoreau spent two years living in his monk’s shack on Walden Pond, alone, but within walk of the city. And he had a few visitors and neighbors. Thoreau didn’t surf, but he did walk through the woods eight miles every day. Those kinds of pursuits (surfing and walking) place obvious limits on other options, finding a job, raising a family, going out for pizza and a movie every now and then, not to mention finding the time to read a book about some surfer’s year at the beach. Maybe hell is an ocean with waves but none you can take off on, none for you, caught inside a commute. Quit daydreaming about the surf and get back to work. You can always read about the ocean, in bed, before sleep, before falling into the deepest ocean of them all.

With thanks to my brother John’s friend Lisa who brought “Caught Inside” to my attention. Black and white photos in this post include featured photo of me on wave (without wetsuit) with surfing buddy sitting outside at El Porto, 1969. Collage of waves with me on my Jacobs Surfboard, same day. Those were typical waves for an El Porto foggy summer morning. The aficionados would have taken a look and continued their search, leaving the slop all to us!