For a couple of years, I took classical guitar lessons. Once a week, I arrived at my teacher’s house, obediently left my shoes on his front porch, and sat with James in chairs arranged in the middle of an empty room, Feng shui, he said, facing south into a single music stand, while in another room, unseen, his partner exercised on a mini trampoline. James was fond of what he called Sufi sayings, and used them to convey guitar techniques. In our first lesson, James asked me what I was after. I had already been playing the guitar for years, a kind of folk jazz free-lick fingerstyle, but I wanted to learn something about music theory, better learn the fretboard, and better read notes.

“Playing classical guitar,” James said, “is not about musical theory. And once you get the notes, you don’t think about them, any more than you think about individual letters when you read a text. The theory is in the work, placed by the composer. What the guitarist does is technique.”

James frowned at my guitar. I had a better guitar at home, I told him, but a steel string folk guitar, unsuitable for classical playing. And I had a three quarter size nylon string acoustic, but it didn’t hold tune. “Get rid of all those guitars,” James said, “and get a good instrument, the best you can possibly afford. You play an instrument to make sound.”

Then James asked to see the fingernails on my right hand, and he took a steel file to them, and then sanded the nails smooth with a fine piece of wet and dry sandpaper. The rest of that first lesson was spent learning how sit and hold the guitar, how to breathe and relax the shoulders and neck, where, James said, I appeared to carry all my stress and tension.

Regarding the care of fingernails, I mentioned to James I was playing on a city co-ed softball team, where I might wreck his fingernail work. “If you are a good softball player,” James said, “you won’t hurt your nails. Fielding a ball is technique.”

James was an excellent guitarist, but he had difficulty performing in public. One day, James informed me he was moving away. He was giving up the guitar and going into typing. He was going to be a typist. He was passing me on to another guitar instructor. I was never sure if his move to typing was true or if he was using a kind of Sufi-like koan to send me a message about my guitar playing ability. In any case, I was not dissuaded; I thought about composing a piece for typewriter and guitar.

“What have you learned in your time with me?” James asked, in our last lesson. “That I want to play the guitar beautifully,” I replied. “You already can play beautifully,” he said, “but you are a poor listener.” 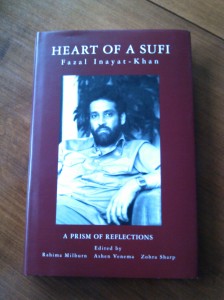 I thought about James, recently, reading through Heart of a Sufi: A Prism of Reflections (Arch Ventures Press, 2010), about Fazal Inayat-Khan (1942-1990), also known as Frank Kevlin, a name Fazal invented in an effort to circumscribe his legacy as grandson to Pir-o-Murshid Hazrat Inayat Khan, who was instrumental in broadening awareness of what Fazal apparently preferred to call the “Sufi Way” around the world. The book is a high quality, sewn bound hardback, and includes black and white photographs, and informative appendix matter (contributor profiles, bibliography, glossary, website links). The primary content of the book consists of anecdotal, testimonial, and essay-like pieces contributed by people who knew Fazal as students or followers or were community members, particularly of Four Winds, a kind of commune located near Farnham, UK, and which was Fazal’s home for a time.

The text is, then, an oral history. Twenty-one writers contribute experience with Fazal profiles primarily, it seems, from the 1970’s, a time when interest in communal life and alternate inquiries into how one might live flowered in many countries around the world. The book will be of interest to researchers working on oral histories, religious or spiritual movements, charismatic leaders and followers, or the period in and around the 1970s – as well, because Fazal was a trained psychotherapist, researchers interested in therapy fields as well as the functions of the mind and its potential spiritual energy or in foundations of learning and being and becoming.

What I learned of Sufi from James amounts to about as much as I learned of guitar, which is to say that I am not a good listener. But the Prism of Reflections text is a good read for those interested in experiencing vicariously the era noted for gurus, spiritual quests, alternative life styles and approaches to religious and spiritual questions. The book is not an attempt to convert readers to any kind of Sufi practice. Its purpose seems to be primarily a vehicle to remember and give tribute to an influential teacher while describing his impact on the individual. Little attempt is made to venerate or hold Fazal up as a saint. And indeed, my own general skepticism of movements and teachers was catalyzed by some of the anecdotal evidence presented.

For example, there is this conversation with Fazal related in one of Ashen Venema’s pieces:

“After the Earthing event at Four Winds Fazal invited me to stay on, with a condition,
‘You must at all times do as I say.’
I was speechless, and held his gaze for what seemed an awesome long time. He must be joking, I thought, he can’t be serious. I did not know then that Fazal’s teaching respected doubt, deeply, as the true measure of one’s faith. I struggled for a tactful answer. All of a sudden Fazal smiled and winked an eye. He didn’t have to say a word. I trusted the light of intelligence in his eyes” (49).

Fair enough, but something a bit creepy lingers with that “at all times do as I say,” which he apparently said to others also. And the passage above might leave the reader, as many of the pieces in the rest of the book also might, with a cryptic experience. At the same time (and of course, as several contributors seem to suggest, the anecdotes may say as much or more about the writers than about Fazal), the memoir-style remembrances seem honest and balanced in their critical approach. Ashen goes on to say:

“The Sufi family was and is an enigma, a spicy mix of characters with little in common. We could have come from different galaxies…Groups reveal to us our place in the human family, reflect the warring crowd within our individual psyche, where we struggle towards a dynamic balance and optimal functioning in a complex world. Groups quicken the process of psychological integration – and, ultimately, the freedom to be what we are already” (49-50).

Later in the book, though, I came across this, a bit shocked and surprised:

“Principles relating to the customer

In context, a section on the meaning and strategies of leadership, the principles are not at all jarring – I mention it here to help illustrate the wide spectrum of approaches the contributors took to remembering their experiences with their teacher. Fazal himself seems to have been somewhat isolated or even alienated by his own persona as potentially viewed and distorted by others. As a kind of celebrity, he seemed aware there would be students who would not necessarily benefit from a mentor they filled with their own projections. But in that sense too, the book acknowledges the difficulties inherent in the entire enterprise.

There is great value in this kind of book, a collective memoir remembering a time, place, and person influential in helping shape the direction of individual lives and responsible for the continuity of group efforts that will no doubt be compromised by the vicissitudes of individual needs and desires as principles move through changing environments and meanings and time. The book may serve as an introduction to further studies, as its bibliography and glossary make clear. The book is learned and credible, and will be valuable to specialists and researchers of various topics, but again, its greatest value to the general reader is probably in the diary or memoir like diversity the individual contributors bring. The book is engaging precisely because it’s readable. These are very interesting people, people who have struggled with self and meaning, direction and efforts to contribute to something larger than their individual awareness might project. And many of the anecdotal pieces are down to earth descriptions of the man Fazal and his work and time. Taken as a whole, they create an oral history biography.

And if you find, after reading the book, there does not appear to be a Sufi in you, you can always pick up the guitar. 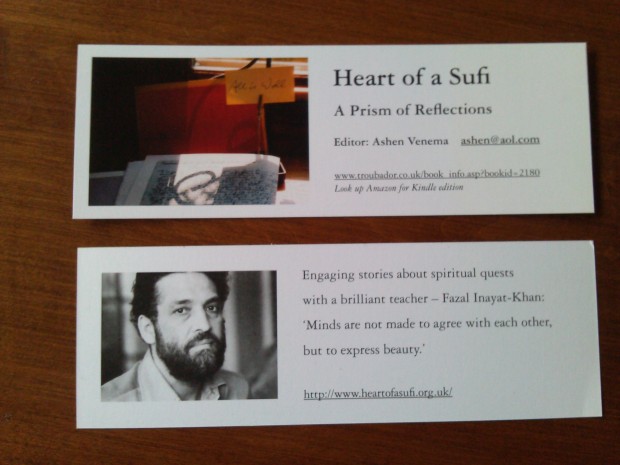