For the first leg of my triathlon event yesterday, I boarded Line 15 and rode down to the river, disembarking at the east end of the Hawthorne Bridge. I sat in the last seat of the bus, in the left corner, with this week’s New Yorker fiction issue. I had read on the bus stop the Langston Hughes story, written around 1960 but only recently discovered. More about that in a subsequent post.

On the bus, an ad caught my attention, a woman in a red dress, orange hair, the copy: “Be More Brilliant.” The ad was up front, behind the driver’s seat, and I was too far away to read the smaller print. Note though that the imperative doesn’t suggest you are not brilliant. If you are not brilliant at all, you can’t be more brilliant. But why be “more brilliant”? Don’t I attract enough moths already? I thought of the two books I recently put out. Maybe my writing should be more brilliant. I took some pics from the bus of the south side of Belmont.

The afternoon was still overcast, and I felt a few drops of rain as I began the second leg of my triathlon, walking down the ramp from the bridge to the Eastbank Esplanade, a more brilliant name for the shared sidewalk with bike path that runs along the industrial, east side of the Willamette River.

I walked south along the river, a little under a mile, to Susan’s work, where I started the third leg of my triathlon, a short drive to Em’s place to visit the girls.

I didn’t get any pics while driving, driving a car these days multi-tasking enough as it is. The few pics I’d taken of the south side of Belmont, from the bus, came out blurry, not too brilliant. I tried to get a few murals, and a couple of the old buildings, the ones the developers, none too brilliantly some have been arguing, are in a hurry to tear down. We passed a typical east side tavern. I realized I have my shutter delay set too long. I had to anticipate where the bus would be when the shutter finally clicked. At the river I saw the lean-to boat setup again, and tried to get a contrast pic of the east side boat in the foreground with the west side yachts in the background. I paused at the OMSI sign to repeat Oṃ maṇi padme hūṃ a few times, feeling even less brilliant as I moved on. I never tire of the sign of Theory, and took yet another pic of it. The blue building was brilliant in the soft afternoon overcast light.

At Em’s, I snapped a pic of her copies of “Penina’s Letters” and “Coconut Oil,” sitting on the shelf next to her cookbooks, and I wondered if my covers were brilliant enough, or brilliant at all. I think so. But to some, brilliant might suggest shiny, and I went with a matte finish.

In Em’s yard, I took some pics of a flowering tree and a tricycle rained in rose petals. It’s almost dragonfly season here, and I thought how nature always seems sufficiently brilliant, yet also always seems to be becoming more brilliant. Nature is superlative, while we can only ever be comparative, until we remember that we are also part of nature, where we are most brilliant. 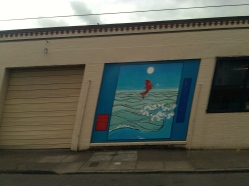 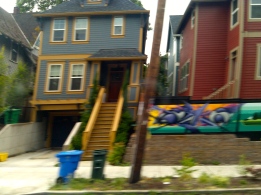 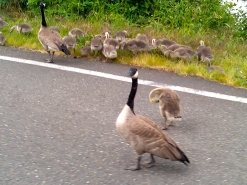 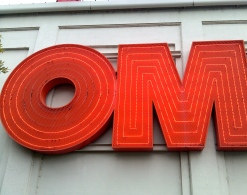