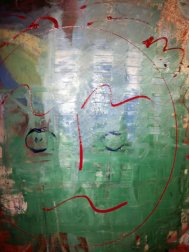 Derrida seems satisfied if not happy with his contradictions, with having learned finally to live with them unencumbered by any implicit criticism. His primary concern in his last days appears to have been what comes after the final act of writing. After all, “there are, to be sure, many very good readers (a few dozen in the world perhaps, people who are also writer-thinkers, poets)” (34). Were he a blogger, would Derrida be thus assured of 36 followers? Jesus had only 12, but even they were not always reliable.

Can a writer ever finally trust any reader? Part of the problem seems to be that readers do have an unconditional freedom to read from their own particular singularity, always peculiar. It’s all they can do, as general readers, apart from the 36 carefully selected followers, who must leave their families behind. It’s not that whatever you say will automatically be misunderstood, but that conditions of freedom vary among individuals. But Derrida says at the same time, “You don’t just go and do anything with language; it preexists us and it survives us” (36). For Derrida, deconstruction was a form of “self-critique” (45). Before “learning to live finally,” one must deconstruct oneself.

In his idea of “The University Without Condition,” Derrida wants “absolute claim to an unconditional freedom to think, speak, and critique” (48). The presumption is there are conditions set by “political or religious power” (48). Kant’s solution that scholars be free to say whatever they want as long as they keep it in the University was not enough for Derrida. But the philosopher who leaves the University becomes an outsider, a blogger, as opposed to a scholar. Not that it matters, because

“…you do not know to whom you are speaking, you invent and create silhouettes, but in the end it no longer belongs to you. Spoken or written, all these gestures leave us and begin to act independently of us.” (32)

Jesus spoke to a general audience, asked for similar unconditional freedom wherever he happened to be located, but he was ready to give to political power what belongs to political power, while Christianity too often has turned into a University that, like the University of Kant’s that Derrida points out, is only free on its own grounds.

Any notion of finally can only be fantasy; life goes on with and without us. What happens finally is the words stop coming, we stop thinking with words, and must figure out some other way to deconstruct.

Learning to Live Finally: The Last Interview [with Jacques Derrida]. Melville House, 2007. 95 pages, including a 27 page selected bibliography of works by Derrida published in English.