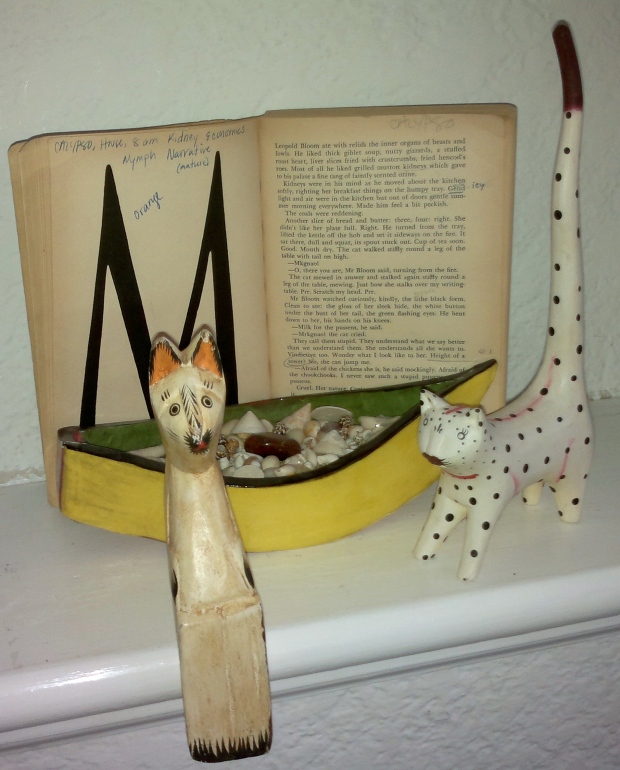 Abducted by alien cats from outer space and whisked away to a faraway planet then shot back to Earth from a circus cannon cocked with physicist rubber string theory, a cat cannonball, Scamble tries to interest Cramble in a tabloid worthy extraterrestrial tale!

Scamble: “And you have nothing to say?!”

Cramble: “Does this have something to do with my recent cloture motion?”

Scamble: “No! The cat planet is called Mkgnao!9. It’s all bushes and trees, birds and fish, and dunes of kitty litter. It’s a cat’s paradise. Everyone there is a hep cat!”

Scamble: “Nonetheless, no matter what radio station you play, Mantovani! The planet is lush with the sounds of birds and strings and bugs flirting about hither and thither and streams of white wine full of fish on the lark. I’m thinking of moving to Mkgnao!9. Do you want to go with me?”

Cramble: “Sounds too good to be true. What’s the catch? I’ll bet there’s a downside.”

Scamble: “Their oceans are filling with used kitty litter.”

Cramble: “Making it difficult to know how to pack. In any case, how will you get back to Mkgnao!9 if the hep space cats don’t come pick you up again?”

Scamble: “Joyce is the patron saint of cats up on Mkgnao!9.”

Scamble: “I’m going to write a memoir about my Mkgnao!9 experience!”

Cramble: “Sounds wild. I’ve heard the memoir form is popular these days. I was thinking of writing one, but I can’t seem to get past chapter one, “Begot to Nap.” But why don’t you create something new? Wasn’t that the gist of Joyce’s gig, to repair in the garage of his brain the broken bicycle of his island, rally the folks to a new way of riding, or words to that effect?”

Cramble: “It’s a good thing the id is kept out of sight.”

Scamble: “Do cats have an id?”

Cramble: “Everything’s got an id, if only you can find it.”