A group of moonstruck locals climbed to the top of the park Sunday night to view the rising of the super moon. In Italo Calvino’s short story “The Distance to the Moon “ (1965), the characters climb to the moon from Earth using ladders:

“Climb up on the moon? Of course we did. All you had to do was row out to it in a boat and, when you were underneath, prop a ladder against her and scramble up.”

It’s the same moon Leonard Cohen had in mind when he sang,

But which moon are we after?

In Buckminster Fuller’s book “Nine Chains to the Moon” (1963), he explains the title:

Fuller may have climbed up to the moon to write some of his books.

When the Brooklyn Dodgers first arrived in Los Angles, they played in the Coliseum, which was not built for baseball, and the fence in left field was so close that a screen was put up so homers would not be too easy. But a Dodger player named Wally Moon cleared the fence so often his homers came to be called “Moon shots.” The Space Race was on.

“There is, after all, another side— a dark side — to the human spirit, too. Men have hardly begun to explore these regions; and it is going to be a very great pity if we advance upon the bright side of the moon with the dark side of ourselves, if the cargo in the first rockets to reach there consists of fear and chauvinism and suspicion. Surely we ought to have our credentials in order, our hands very clean and perhaps a prayer for forgiveness on our lips as we prepare to open the ancient vault of the shining moon.”

Joyce had, in “Ulysses,” given his version of the perigee. From the penultimate episode of Joyce’s “Ulysses,” written in catechism form:

“With what meditations did Bloom accompany his demonstration to his companion of various constellations?

Meditations of evolution increasingly vaster: of the moon invisible in incipient lunation, approaching perigee: of the infinite lattiginous scintillating uncondensed milky way, discernible by daylight by an observer placed at the lower end of a cylindrical vertical shaft 5000 ft deep sunk from the surface towards the centre of the earth: of Sirius (alpha in Canis Maior) 10 lightyears (57,000,000,000,000 miles) distant and in volume 900 times the dimension of our planet: of Arcturus: of the precession of equinoxes: of Orion with belt and sextuple sun theta and nebula in which 100 of our solar systems could be contained: of moribund and of nascent new stars such as Nova in 1901: of our system plunging towards the constellation of Hercules: of the parallax or parallactic drift of socalled fixed stars, in reality evermoving wanderers from immeasurably remote eons to infinitely remote futures in comparison with which the years, threescore and ten, of allotted human life formed a parenthesis of infinitesimal brevity.”

No, the answer is not as brief as those in the Baltimore, and we still seem to be nine chains from the moon. In any case, must it always sound so cold? Not at all. Joyce follows up with a question and answer that deconstructs the man in the moon.

Sevareid had acknowledged the emergence of a new moon:

Joyce also allows for a double moon, one of science, one of metaphor, in Bloom’s catechism answers:

“What special affinities appeared to him to exist between the moon and woman?

Her antiquity in preceding and surviving successive tellurian generations: her nocturnal predominance: her satellitic dependence: her luminary reflection: her constancy under all her phases, rising and setting by her appointed times, waxing and waning: the forced invariability of her aspect: her indeterminate response to inaffirmative interrogation: her potency over effluent and refluent waters: her power to enamour, to mortify, to invest with beauty, to render insane, to incite to and aid delinquency: the tranquil inscrutability of her visage: the terribility of her isolated dominant implacable resplendent propinquity: her omens of tempest and of calm: the stimulation of her light, her motion and her presence: the admonition of her craters, her arid seas, her silence: her splendour, when visible: her attraction, when invisible.” 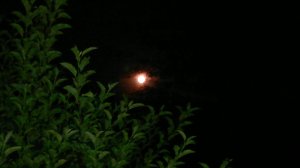 Pic to left: back from the mountain, down from the moon, in the backyard, a somewhat diminished super moon over the apple tree. I picked up a guitar. There are many more songs with moon in their title than sun. The reflection is not as blinding as the reality.