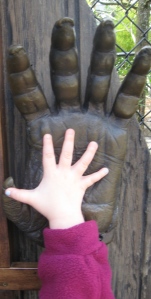 According to the Global Footprint Network, the Ecological Footprint is “the metric that allows us to calculate human pressure on the planet and come up with facts, such as: If everyone lived the lifestyle of the average American we would need 5 planets.” There are several footprints currently being measured, carbon and water, for example, and we are encouraged to measure our own personal footprint and to reduce the size of our footprint, “to tread more lightly on the earth.”

Maybe poetry does not have a footprint, but a handprint. A print that shows who was here, and this is what they saw, what they heard, what they tasted, what they touched and felt, what they smelled. But also, what they and those close to them thought about this sensorium of experience, how they responded, how they changed, what they promised and what they betrayed, how they might have wronged and how they might have been forgiven. To do all of that, poetry needs a wide spectrum of possibilities. Some of these possibilities might lead listeners, readers, away from well worn paths, into uncharted waters, rough seas, or lulls, or blank spaces with no echo. Other possibilities might lead readers back into cities with crowded sidewalks, or into libraries full of musty, dusty books. Or into parks, or taverns, or beaches, or mountains and lakes and rivers, or nurseries or old folks’ homes, or orphanages or prisons, or churches or corporations, or onto ships or bicycles or cars or helicopters or surfboards. The point here is that any of these possibilities, for any individual listener, might wind up a dead end, but it can’t be wrong if it widens the spectrum, for the wider the spectrum, the greater the possibility of poetry.

I sometimes wonder if human nature improves over time. In other words, are we better than our ancestors? We might like to think so. Technology and medicine, the comforts of modern housing and transportation, what we call advancements and improvements resulting in higher standards of living might lead us to think we are smarter, more accomplished, in a word, better than our ancestors. But what of our essential nature? Has that improved? Does it improve? Can it improve? I have doubts. I think we’re probably the same inside as we’ve always been. It’s the same old heart beating in the same old chest.

In any case, what inspires this post is another skirmish posted in the poetry war, an internecine, academic argument. I’ll just point to David Biespiel’s response over at the Rumpus, and interested readers can follow the trail-links from there. Like most wars, it’s sometimes hard for an outsider to get what it’s all about, but like most fights, this one’s about territory and who’s to have the final word. But it’s also about values, what we value in poetry, and whose values ought to prevail. It might be important to remember that what we value is not necessarily what’s good for us. What we value is simply what we want.

There is something about poetry to value, to want, that is relevant to the discussion. One of my favorite books of poems is “Paroles,” by Jacques Prevert.* Prevert lived in Paris during World War II, during the German occupation. Writing in 1964, Lawrence Ferlinghetti, in his translator’s note introduction, said, “I first came upon the poetry of Jacques Prevert written on a paper tablecloth in St. Brieuc in 1944…a poetry (his worst critics will tell you) which is perfectly suited to paper tablecloths, and existing always on as fine a line between sentiment and sentimentality as any that Charlie Chaplin ever teetered on.” That “perfectly suited to” is important, for it values a poem for its success in achieving its purpose. Even if we might think the purpose is bad, it can still be a good poem. This is a sentiment many critics find difficult to stomach, but it’s vital to the health of a wide spectrum of poetic possibilities.

But there’s another reason I like Prevert, and that has to do with the idea of sitting out at a sidewalk cafe table writing a poem on a paper napkin, not even a paper tablecloth, a poem someone might read, or no one might read. Poetry was a way out of oppression for Prevert, and poetry remains a tool today for release from the natural malaise that comes from everyday life, even if that release is only temporary, and even if that malaise is from human pressure. The release comes in the act of writing the poem, not from the possibilities of someone else reading it or of having it published or some fantasy of poetic fame, but from the existential act that says, I am here, and this is what that means, for now. The act of poetry leaves a tiny Ecological Footprint. That sidewalk cafe napkin poem might be a good way to “tread more lightly on the earth,” even as it adds to the size of the poetry footprint.

*Jacques Prevert’s “Paroles” is Number 9 in “The Pocket Poets Series,” first published in the City Lights Books edition in July 1958, in San Francisco. I have the Sixth Printing, February 1968.