Does anyone go caroling anymore? Apparently they still go caroling in Australia (see Carols by Candlelight). But I’ve heard no carolers in these parts for some time now. I fear it’s a gone tradition here. I wouldn’t mind hearing some carolers outside our place. Susan would have some wassail brewing. I grab my guitar and tell her I’m going out to do some solo-a-caroling. Give me that guitar, she says. You’ve had enough wassail for one night.

So, no caroling. Meantime, we get the Christmas music out. This year we keep coming back to one of those Starbucks compilations, Making Merry. Willie Nelson opens with Norah Jones on “Baby, It’s Cold Outside,” featuring a steely guitar and a briefly haunting harmonica break, just enough to bring the chill in, the reminder that Christmases, for all their warmth, all become a Christmas past. Another standout on this CD is Herb Alpert and the Tijuana Brass on “My Favorite Things,” which ends, oddly enough, with some sort of James Bond theme riffing. But it is cold outside, and I was in Fort Huachuca one winter, and can tell you it gets cold down south too. Anyway, baby, it’s cold outside here now, so to dispel the chill, I put some Elvis on and the place starts to warm. A couple of good ones on this It’s Christmas Time CD, like “Santa Bring My Baby Back (To Me),” and “Blue Christmas.”

What am I going to sing with my guitar if I go out a-caroling, Susan asks. Come on, baby, I say. I’ll be Barenaked Ladies & you can be Sarah McLachlan and we’ll do a cover of their uptempo “God Rest Ye Merry Gentlemen.” We’ll both be arrested, Susan says, and not by God. Oh, well, I say, and put on the classic Vince Guaraldi Trio doing the jazz inspired A Charlie Brown Christmas. 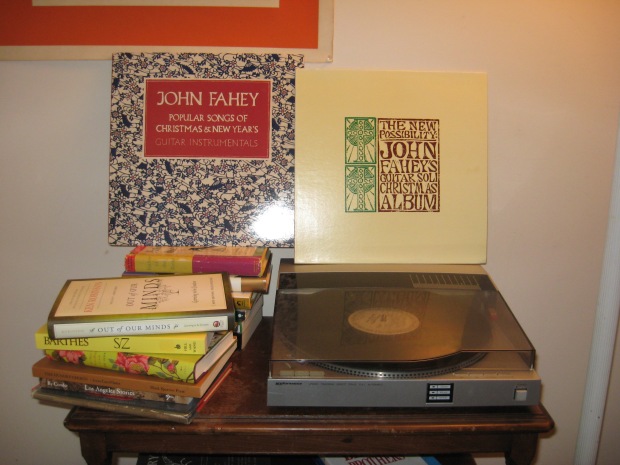 We saw the great, original, finger-style guitarist John Fahey at the Ash Grove in Los Angeles many Christmases ago. The New Possibility came out in 1974 (Takoma Records), and includes the far-out pieces “Christ’s Saints of God Fantasy” (Hopkins-Fahey), and “Lo How a Rose E’er Blooming” (Praetorius). Popular Songs of Christmas & New Year’s, with Portland’s renowned guitarist Terry Robb, came out in 1983. Some very cool medleys, and “The Skater’s Waltz,” and “The Waltz You Saved for Me.” Maybe I can talk Susan into a New Year’s waltz, if I can’t go a-caroling.