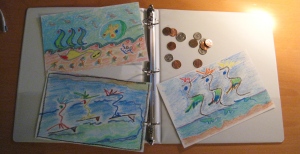 “The mass of men lead lives of quiet desperation,” Thoreau said, which is to say, most guys – their binders are empty. Bukowski explains, over at Letters of Note: the drone ant has sacrificed his life for a 401Kafkaesque letter from his Man-auger: “Sorry mate, we’ve a cutback comin’ down the line.” Bukowski lights out for the territory, not ahead of all the rest, like Huck did, but behind, yet still grateful for the chance, as Thoreau put it, “…to live deliberately, to front only the essential facts of life, and see if I could not learn what it had to teach, and not, when I came to die, discover that I had not lived.”

But to live deliberately, or deliberately meanly, as Bukowski did, requires at least some dough, as Bukowski acknowledges in his letter of thanks to John Martin, his publisher and patron. How much dough? $100 a month, for life, as long as he kept writing, according to the documentary Born Into This (brief review here; not recommended for the squeamish). How much did Buk need to sustain his values? What would he have done differently with $1,000 per month, or $10,000? More dough, more beer? Thoreau also found no sense in saving for a doubtful future.

“The man who goes alone can start today,” said Thoreau. In any amount, against this going alone, we find E. O. Wilson continuing to surprise us: “‘Individual selection is responsible for much of what we call sin, while group selection is responsible for the greater part of virtue,’ he writes in one of the book’s bluntest passages. ‘Together they have created the conflict between the poorer and better angels of our nature'” (Susanna Rustin, Guardian interview, 17 Aug 2012). Which angel carries cash? Thoreau thought he “was rich, if not in money, in sunny hours and summer days, and spent them lavishly.”

Meanwhile, over at The Dish, Andrew Sullivan, who’d be the world’s richest blogger if posts were dollars, points us, in a post titled “What’s the Matter with Money?,” to an argument proposing to assuage any Thoreau induced guilt we might be feeling over our purchased stuff. “Buyology,” by Jerry DeNuccio, suggests money is good because when we buy stuff we sustain the consumer colony. The consumer is thus one of the “better angels of our nature.” But do we really want to be ants? And isn’t most of our money spent on things we don’t really want? I’m not sure what audience needs an argument in favor of money. It can’t be the poor, who know only too well the value of money and what it might buy (food and good teeth to eat it, clean clothing and a private place to dress, health care not to be confused with drugs, not to mention Ishmael’s bed and table), but Thoreau is clear about his audience: “Perhaps these pages are more particularly addressed to poor students,” whose meagre earnings don’t necessarily go for cool stuff: “Those things for which the most money is demanded are never the things which the student most wants.” Cynics are fond of finding Thoreau contradicting himself, and he’s often laureled a hero of hypocrisy. It’s become a sixth way added to Walter Harding’s “Five Ways of Looking at Walden.” But in no place do we find Thoreau at odds with the value of furniture, a hearth, or companionship. He even kept three chairs for society. But Thoreau did not consider himself poor, as his conversation with John Field, who “was discontented and wasted his life into the bargain,” in the “Baker Farm” chapter of Walden, makes clear. Thoreau simply wanted to live on less stuff. For Thoreau, less is more to the max.

In any case, Thoreau did not ignore economy, his own or his society’s. The first chapter of Walden, “Economy,” is roughly a quarter of the book, and readers often find tedious pages in Thoreau’s accounting. This is part of our economy, too, according to Thoreau, ants building a railroad: “This spending of the best part of one’s life earning money in order to enjoy a questionable liberty during the least valuable part of it…He should have gone up garret at once. ‘What!’ exclaim a million Irishmen starting up from all the shanties in the land, ‘is not this railroad which we have built a good thing?’ Yes, I answer, comparatively good, that is, you might have done worse; but I wish, as you are brothers of mine, that you could have spent your time better than digging in this dirt.'”

No one doubts the importance of money and stuff, but money is a fifth column to Thoreau’s four necessaries of life (“Food, Shelter, Clothing, and Fuel”). The question is, “How much is enough? and How do I know what I want?” as Bill McKibben puts it in his introduction to the Beacon Press Walden (1997). For Thoreau, “Superfluous wealth can buy superfluities only. Money is not required to buy one necessary of the soul.” More, the problem with money isn’t that it buys stuff; the problem with money is that its superfluity leads to a superfutility, as its surplus grows into a power that dictates what others should do with their money, or what they should do for their money, or what should become of them for a lack of money. And nowhere is this more evident than in the status of women, all around the world, and if “the mass of men lead lives of quiet desperation,” what’s a woman to do who must learn to live with one of these desperadoes?

“Rather than love, than money, than fame, give me truth,” Thoreau concluded.

“Men say they know many things;
But lo! they have taken wings, –
The arts and sciences,
And a thousand appliances;
The wind that blows
Is all that any body knows” (Thoreau’s poem in the “Economy” chapter of Walden).

How many appliances do we need? “…the answer is blowin’ in the wind.”

Related Posts:
The Way We Don’t Age Now: Unhappiness and Hunger in the Land of Plenty
Women Under the Glass Ceiling: Parity and Power in the Pipeline
The Glass Guitar Ceiling
Stuffed Post
Thoreau Posts