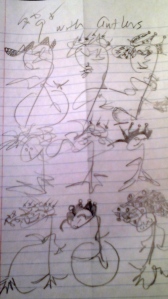 “We live meanly, like ants,” Thoreau tells us in the “Where I Lived, and What I Lived For” chapter of Walden, just after he’s divulged his reason for being in the woods: to distill life, then distill it some more, until he has more than 100 proof. And if life prove mean, then he will “publish its meanness to the world.” What does he mean by meanness? The opposite of simplicity, for one thing, letting the railroad ride over us, for getting off track is devalued; today Thoreau would use the automobile as the vehicle and mean man the asphalt. His discussion of living meanly anticipates the later episode of the war of the ants in the “Brute Neighbors” chapter. But there, the ants are anthropomorphized as warriors from antiquity. In the ants he sees meanness because in the ants he sees men. But what could be meaner than the mother who “had charged him to return with his shield or upon it”? Thoreau even imagines the ant armies with military bands blowing on the sidelines just as fiercely as the combatants. Yet Thoreau anticipates E. O. Wilson, whose newest work explains altruism, communication, and cooperation as fundamental to advanced social behavior successes, both in ants and men, as opposed to competition and meanness. The fittest may turn out to be the one who can best cooperate, sacrifice, and share. Wilson considers self-understanding as vital to survival of the species. Thoreau agreed. Thoreau leaves the pond when he does because he’s called by Mrs. Emerson to come care for her family while her husband will be away on a lecture tour. Thoreau leaves Walden quickly, with an attenuated conclusion.

The E. O. Wilson reference is to a Smithsonian.com interview with Wilson, “What Does E.O. Wilson Mean By a ‘Social Conquest of the Earth’,” by Carl Zimmer, March 22, 2012.

Mapping a Reading of Thoreau’s Walden

Now is the Science of our Discontent