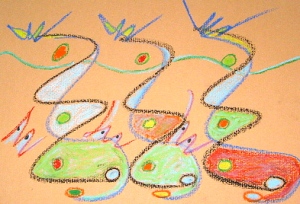 Ian Frazier’s “Hungry Minds” concerns three themes: a writer’s workshop, the participants guests of a soup kitchen; the soup kitchen, the largest in the US, intertwined with the history of The Church of the Holy Apostles, in Chelsea, where the article takes place; and three types of hunger: physical, intellectual, and spiritual. The punctuation format for the previous sentence looks like this:

Frazier’s article contains 36 semicolons. One of his paragraphs contains 8 semicolons; another, the one following the 8, contains 14 semicolons. Thus, there’s a fourth theme that might be said to emerge in Frazier’s essay: punctuation.

The two paragraphs containing the 22 semicolons are lists, essentially, and punctuated as items in a series, the semicolon used to separate items that contain commas. Without the semicolons, the items would run together, and reading would be more difficult, clarity lost. Of course, Frazier could have separated the items as sentences, using periods, but in context that solution would have proved monotonous, unnecessarily repeating full subjects and predicates. The remaining 14 semicolons are used for a variety of other purposes throughout Frazier’s essay.

It’s silly to say one does not like semicolons, or any other punctuation mark. It’s like saying one doesn’t like cuff links or tie clips. True, hardly anyone wears cuff links anymore, and business casual attire has rendered ties almost useless, and without a tie, there’s not much need for a tie clip. But if one still wears buttonless cuffs and floppy ties, then cuff links and tie clips are useful. If you don’t like them, fine, don’t wear them; but your not liking them hardly qualifies as a proof that there’s something wrong with their use. This is not to say that Frazier wears either; I don’t know. But his punctuation style invites comment, and “Hungry Minds,” in particular, proves an effective piece for the explication of punctuation and especially of the semicolon.

So, who doesn’t like semicolons? Kurt Vonnegut has been quoted yet again. It’s true that in “A Man Without a Country” (Seven Stories Press, 2005, p. 23), Vonnegut offers a first rule of creative writing: “Do not use semicolons,” followed by a creative description of where semicolons prove a writer to be from. It’s been quoted all over the place, like “Kilroy Was Here,” but what about Vonnegut’s paragraph following? “And I realize some of you may be having trouble deciding whether I am kidding or not. So from now on I will tell you when I’m kidding” (p. 23). 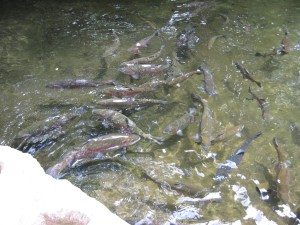 So, was he kidding about his advice against the use of semicolons? The half-quote cast adrift from its context seems to have originated with the Guardian. Did Vonnegut abhor the semicolon? It seems unlikely, given the use of the semicolon in his own writing; indeed, it’s one curious aspect of the Vonnegut quote supposedly calling out semicolons as a kind of badge of the degreed that he did use semicolons. And if his attitude toward semicolons was, at worst, apathy, then why did he create this straw man position? He must have known he was feeding the pool of farm raised trout. A cursory glance at some Vonnegut books on my shelf spotted semicolons as follows:

I didn’t reread all of these books pulled from my shelf, just glanced through the openings, and Vonnegut appears to use colons copiously and dashes – lots of dashes, too – in addition to the few semicolons sprouting like nettles.