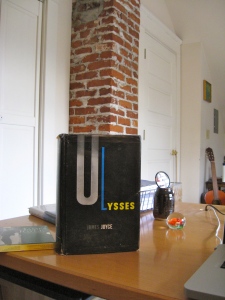 Bloomsday, the June 16, unofficial, worldwide holiday, celebrates one of the world’s most extraordinary books, James Joyce’s “Ulysses.” June 16, 1904, is the day the book takes place. And one of the extraordinary things about the book is that its hero, Bloom, is not extraordinary at all. “The initial and determining act of judgment in his [Joyce’s] work is the justification of the commonplace,” wrote Richard Ellmann in the introduction to his biography titled simply “James Joyce” (1959).

Joyce had and continues to have detractors. Roddy Doyle, for example, would at least like the world to know that there are other Irish writers, some brand new who also write about the common man. Noted, Roddy. But Joyce’s example provided others, including Roddy Doyle, with extraordinary opportunities in one important way, without which it might be hard to imagine works like Doyle’s Barrytown Trilogy, which includes “The Commitments,” “The Snapper,” and “The Van” (all hilarious).

Ellmann explains: “Joyce was the first to endow an urban man of no importance [Bloom] with heroic consequence.” In fact, some early readers, Ellmann explains, thought Joyce must have been kidding, that he “must be writing satire,” for “how else justify so passionate an interest in the lower middle class?” To his Marxist critics, Joyce commented, “I don’t know why they attack me. Nobody in any of my books is worth more than a thousand pounds.” Maybe the attack is explained because “Ulysses,” past the first three episodes, anyway, is written in such a way as to prevent access to the average, common interest reader. This is one of Roddy Doyle’s complaints.

Ellmann concludes, “Joyce’s discovery, so humanistic that he would have been embarrassed to disclose it out of context, was that the ordinary is the extraordinary.” “Dubliners,” Joyce’s book of short stories that preceded his first novel, “A Portrait of the Artist as a Young Man,” which was followed by “Ulysses,” is characterized by clear and concise writing that is accessible. And just so, Frank Delaney has devoted his Happy Bloomsday podcast, titled “Meeting Joyce,” to sharing Joyce’s “Dubliners.” It’s a great way to start reading James Joyce and to kick back and enjoy a bit of Bloomsday.