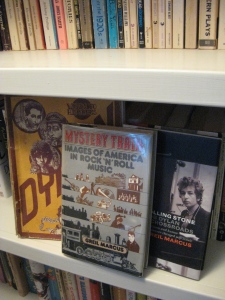 I bought two books at the Rose City Used Book Fair last Saturday, the Li Po of the previous post, and “Mystery Train: Images of America in Rock ‘N’ Roll Music,” by Greil Marcus (1975). The Marcus is a first edition hardback in excellent condition, though it’s apparently not worth much to a book collector; I paid $5 for it. In his “Author’s Note,” Marcus says he felt an affinity for history writers who felt through their work that they belonged to a part of the struggle they wrote about, even if that struggle was long past. “Mystery Train,” Marcus says, was written from “the fall of 1972” to “the summer of 1974,” a time when the struggles of the past merged with the struggles of the present. I’ve not read it, but I’m putting it on the top of the stack. I don’t know why I didn’t read it at the time it came out. I suppose because at the time I was struggling with a few other writers, and, like Dylan said, “You don’t need a weatherman to know which way the wind blows” (“Subterranean Homesick Blues,” 1965).

I have read Marcus, though. I liked his “Like A Rolling Stone: Bob Dylan at the Crossroads” (2005), 225 pages on a single song written and recorded by Dylan in 1965. The song is on the “Highway 61 Revisited Album,” which I listen to almost every day if I’m out in the Ford, since it’s usually the only tape in the car. “Once upon a time,” the song begins, and you know you’re in for a story, and the rimshot gets your attention. Dylan said, though I can’t remember where, either in “Chronicles” or in the 60 Minutes Interview, it might have been, something like, that guy [Marcus] went a little far. Sure he did; that’s what’s so great about Greil Marcus.

I’ve also enjoyed Marcus’s “Real Life Rock Top Ten: A Monthly Column of Everyday Culture and Found Objects,” his Believer magazine article that began, according to Marcus in a Powell’s interview (2006), in The Village Voice “around ’86.” It moved from Salon.com to The Believer, I believe, in 2008. Anyway, I started reading it regularly in The Believer at some point, though I confess I don’t always get the contemporary references (“You never understood that it ain’t no good, you shouldn’t let other people get your kicks for you…,” Dylan again).

I like the way Marcus blends culture and music, and though he probably doesn’t think about it as literature, he might be a kind of contemporary American Roland Barthes. He certainly does not think of rock lyrics as literature. In a 2002 “Online Exchange with Greil Marcus” at RockCritics.com, Marcus had this to say about his “approach”:

“You’re right about my approach, which is a matter of affinities – what I’m drawn to – and learning to follow affinities where they lead – in other words, to trust your affinities. I have no background in poetics. The difference between poetry and ‘rock lyricism’ – if by that you mean song lyrics – is obvious and complete: except for people who think they are poets, like Paul Simon, lyrics are meant to be sung, come to life when they are performed, take their weight and muscle and ability to move from music, and true songwriters understand this. They understand that the most intricate allusive subtleties will be lost in performance, superseded by another quality altogether, and that the most impenetrable banalities can reveal infinite possibilities of thought and emotion when sung. In this sense I think the best songwriters are less afraid of words than poets can afford to be.”

In the film version of Roddy Doyle’s “The Commitments” (1987), in a scene not in the book, Jimmy, who frequently fantasizes success by interviewing himself, toward the end of the film, has his fantasy interviewer ask him what he’s learned from his time as manager of the rock band The Commitments, and he replies with a quote from Procul Harum’s “A Whiter Shade of Pale.” When asked what the lyrics mean, the particular sticking point, according to a BBC analysis, being “the light fandango,” Jimmy responds, “I’m fucked if I know” (the film faithfully captures the flood of F words that fills and overflows the pages of the book).

Words have meaning, too much meaning, suggested Lewis Carroll. Indeed, one should not let another get one’s kicks for one, which is to say one should follow one’s own affinities. Just so, whenever I come across lyrics or poems I can’t seem to get, even after giving them the old college try, I think of Humpty Dumpty’s conversation with Alice about the meaning of things.

“I can explain all the poems that were ever invented – and a good many that haven’t been invented just yet,” Humpty says, and he helps Alice unpack the portmanteau words in “Jabberwocky.” Then later, Humpty offers this:

“‘The piece I’m going to repeat,’ he went on without noticing her remark,’ was written entirely for your amusement.’ Alice felt that in that case she really ought to listen to it, so she sat down, and said `Thank you’ rather sadly. `In winter, when the fields are white, I sing this song for your delight – only I don’t sing it,’ he added, as an explanation. `I see you don’t,’ said Alice. `If you can see whether I’m singing or not, you’ve sharper eyes than most.’ Humpty Dumpty remarked severely. Alice was silent.”