I was trying to recall Ezra Pound’s line, “And men went down to the sea in ships.” Fine, wonderful line, except that’s not what he said. What Pound said, opening “Canto I,” I now recalled, looking it up, was, “And then went down to the ship.” And I was going to say, that if Pound had lived in the South Santa Monica Bay in the 1960’s, he might have said, “And boys went down to the ocean on surfboards.”

But that doesn’t quite work now that I’ve corrected my recall. Pound’s sailors “Set keel to breakers, forth on the godly sea,” while the South Bay surfers of the 60’s, some watermen, some bleached a weak blond on a clean towel far up on the beach, where the waves couldn’t reach them, but still all caught up in the ancient tides that played on the radio and that licked at the western edge of Los Angeles, paddled out on surfboards and set skegs to waves.

Pound does, in “Canto I,” mention a “sea-bord,” and “A man of no fortune,” and this might describe most surfers of the era (sea bored and poor).

Still, Pound’s opening in a remote way does invoke the sport, the art, of surfing, for one catches waves not at the beginning of the wave’s life, but at the end of the swell, as it nears the beach: thus, “And then….” And then paddled out and turned around and caught waves back to the beach. Surf: Pound’s “…water mixed with white flour.”

The waves always look smaller from the beach, and from the waves, sitting on the board, the beach looks, as Pound said, “…not as land looks on a map but as sea bord seen by men sailing” (“Canto LIX”).

So what happens to the surfer sea bored? Just this, from Albert Camus’s essay “The Sea Close By”: “I grew up with the sea and poverty for me was sumptuous; then I lost the sea and found all luxuries gray and poverty unbearable. Since then, I have been waiting” (172). 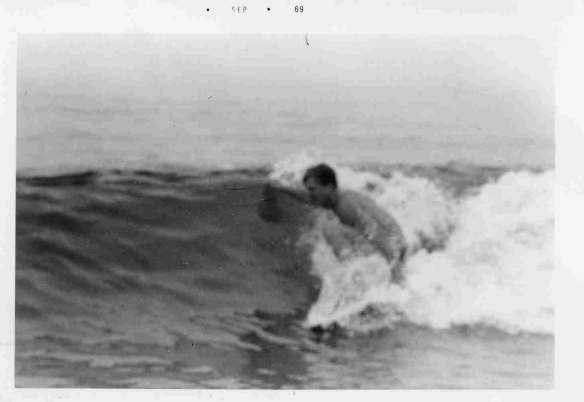 Albert Camus on the Economic Collapse