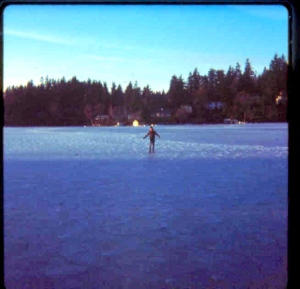 Reading Walden this time around, and coming near the end of the literary sojourn, the Portland east winds blowing out of the Gorge, cracking their taut, dry cheeks while I burrowed into the  “Winter Animals” and “The Pond in Winter” chapters, I reflected on where nature goes in contemporary life, for we spend sweeping resources to turn our backs to her, to hide from her, to ignore her, to close our eyes, ears, noses to her, to avoid her sound and smell and touch, to lock her out. Thoreau went out to meet with her, and he spent quality time observing her habits at close range. Why should we not comb our own urban woods, gutters and sidewalk paths, yards and parks, breezeways and carports, bridges and sidings, bushes and beaches and fields, vacant lots, and streams of rain water running down the oily streets to see if there’s anything left of the nature Thoreau observed and chronicled in Walden? Thoreau asks rhetorical questions; why should not we?

Some interest in nature is suggested by our obsession with the weather and natural disasters (many of which could be mitigated with the simplest of codes, for over 50% of the US population lives within 50 miles of a coastline, where most of the weather spends its wealth). But watching the Weather Channel or studying the sunny or cloudy day emoticons in the newspaper or on our cell phones falls short of Thoreau’s direct contact with the sun, clouds, rain, wind, ice. “But,” you say, donning jacket, scarf, hat, gloves, galoshes, and umbrella, though you’ve only a short walk from house to garage where the car is parked, “we spent a week camping out at the lake this past summer, and have the Facebook pics to show for it.”

Thoreau spends time on the ice in winter, ice-fishing, taking short-cuts across the ponds, viewing the shores from a new vantage point. He seems to have no fear of the ice. There are over one hundred references to ice in the Walden text. Thoreau had a theory, which McKibben remarks on in one of his annotations, that if the world as we know it were to succumb to some modern weather disaster, the calamity would be ice. Yet Thoreau is remarkably resourceful on the ice:

“Once, in the winter, many years ago, when I had been cutting holes through the ice in order to catch pickerel, as I stepped ashore I tossed my axe back on to the ice, but, as if some evil genius had directed it, it slid four or five rods directly into one of the holes, where the water was twenty-five feet deep. Out of curiosity, I lay down on the ice and looked through the hole, until I saw the axe a little on one side, standing on its head, with its helve erect and gently swaying to and fro with the pulse of the pond; and there it might have stood erect and swaying till in the course of time the handle rotted off, if I had not disturbed it. Making another hole directly over it with an ice chisel which I had, and cutting down the longest birch which I could find in the neighborhood with my knife, I made a slip-noose, which I attached to its end, and, letting it down carefully, passed it over the knob of the handle, and drew it by a line along the birch, and so pulled the axe out again” (“The Ponds” chapter).

Once, years ago now, never mind exactly when, I lived in a small house, for a little over a

year, on Lake Oswego, a long but narrow lake fed by streams and the Tualatin River, south of Portland. I was there two winters, and both winters the lake froze over. During the first winter, I walked out onto the ice some distance and had my photo taken. It was a foolish thing to do, walking out on the ice. Unlike Thoreau, I didn’t know the thickness of the ice. The ice covered the water like a blanket with air pockets between the bottom of the ice and the surface of the unfrozen water. Thus the ice sheet moves up and down, cracks with its own weight, stretches and contracts, undulating like a monstrous, frozen jellyfish. I didn’t stay out on the ice very long. I walked out, had the photo snapped, and walked back to the boat dock. I was wearing a Navy flight jacket that I had traded a couple of years earlier for my Army field jacket. Neither would have done me much good had I fallen into the water. It’s taken me a long time to get used to the Northwest climate, but still, if I’m to go out on some water, I would prefer doing it on a surfboard, in warm, salty water, where nothing freezes. I like Thoreau, but I’m not following him out onto the ice again.