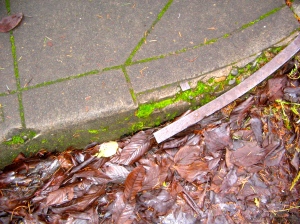 The sidewalks in what used to be called Tabor Heights, on the north slopes of Mt Tabor, were poured in the early 1900’s. The dates are marked on the curbs, but many of the dates are being lost to code enforcement requiring homeowners to fix broken concrete in their sidewalks. Curbs rounding corners were banded with steel to protect them from wheels of horse drawn carts. The steel bars are now peeling off. 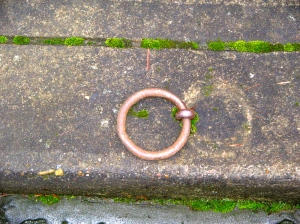 Steel rings were placed into the curbs for horse ties. Some folks have taken to tying play animals to them these days.

The names of the streets were cut into the curbs.

John Lennon once said a poet’s job is to walk around and notice things that no one else has time for. It’s late December, but bulbs are already starting to come up, and noticing them, I was reminded of John.

There are a few poetry posts in the neighborhood. Today, this one contained Walt Whitman. I stopped to read it. Here’s what it says:

“This is what you shall do; Love the earth and sun and the animals, despise riches, give alms to every one that asks, stand up for the stupid and crazy, devote your income and labor to others, hate tyrants, argue not concerning God, have patience and indulgence toward the people, take off your hat to nothing known or unknown or to any man or number of men, go freely with powerful uneducated persons and with the young and with the mothers of families, read these leaves in the open air every season of every year of your life, re-examine all you have been told at school or church or in any book, dismiss whatever insults your own soul, and your very flesh shall be a great poem and have the richest fluency not only in its words but in the silent lines of its lips and face and between the lashes of your eyes and in every motion and joint of your body.”

The excerpt is from Whitman’s preface to Leaves of Grass.

Someone left a small pile of used bricks near the sidewalk. Maybe they are going to make a little stepping block. Used brick is very useful. 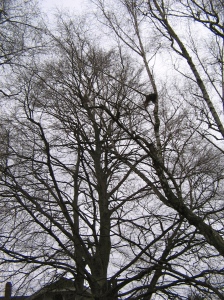 The deciduous trees in the neighborhood are asleep. One of the biggest yard trees around is located on Yamhill, across from the small pile of bricks. 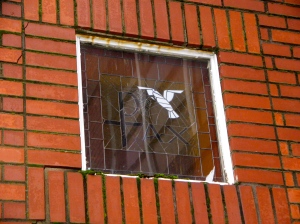 In addition to a lot of bikes, beer, and beards (as illustrated in Alex Barrett’s This is Portland), there are a lot of churches in Portland. This stained glass window is at Ascension, on the corner of SE Yamhill and 76th.

Tri-Met Line 15 passes through the neighborhood. This one’s rounding the Ascension corner, continuing its westward route to Belmont and downtown. 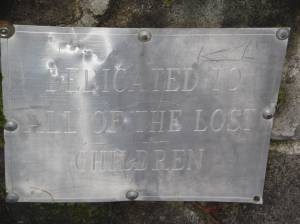 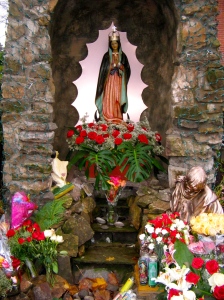 Inside the Ascension grounds, there’s a lovely shrine.

This building on SE Stark shows a number of projects involving bricks. 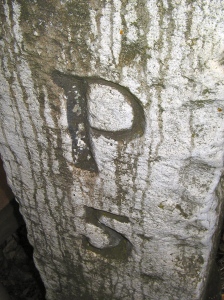 This is a Portland landmark, on SE Stark. Stark was originally called Baseline Road, and from the baseline meridian, measurements and directions were made. The two photos show one of the old baseline markers, located just west of Flying Pie Pizza, on the south side of Stark.

This is another Portland landmark, the original Flying Pie. Above the sign, you can see the tops of the firs atop the northeast corner of Mt Tabor. I’ve dropped a few hundred feet since beginning the photo essay walk.

This is my destination, Bipartisan Cafe, SE Stark and 79th. Note the Vintage cocktail lounge sign just below the Cafe sign, where I’ve played guitar a few times. Vintage used to be the Why Not Wine bar. I played some guitar there when it was the wine bar also, a few times with George, and a few times solo.

Here I am inside Bipartisan, putting together the photo walk essay, drinking a cup of coffee. The cafe is crowded today. I’m sitting on a couch with my back to the wall. They’re playing some good songs in the cafe. People all around me are talking, reading, working on laptops, as I am, drinking coffee. There’s a guy showing his daughter how to play Scrabble. There’s another guy reading and listening to his iPod, white wires going into his ears. Outside, the rain is beginning to fall again. There goes another Line 15. Above and behind me is a large poster of a Rockwell. At the top it says: “OURS…to fight for.” And at the bottom it reads, “FREEDOM FROM WANT.” The drawing is of a family turkey dinner.