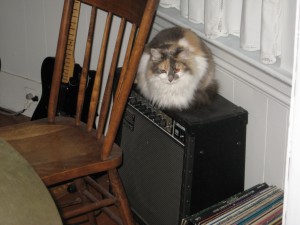 The women’s glass ceiling, that invisible, clandestine barrier that separates any upper economic echelon of men from their connected but not equal women counterparts, apparently extends to guitar playing, as evidenced by the latest Rolling Stone list, “The 100 Greatest Guitarists of All Time” (Issue 1145: Dec. 8, 2011). There are only two female guitarists on the list, Joni Mitchell (# 75), and Bonnie Raitt (# 89). Joni Mitchell was # 72 in the 2003 RS draft, Joan Jett # 87 (Jett didn’t make the 2011 cut). Lists, of course, are made for argument, so why aren’t there more women guitarists on the list?

But it should come as no surprise to find that one woman’s floor is not another man’s ceiling, for the disparity in nearly every correlation shows women living on floors far below men in the economic castle. The gender income gap has narrowed in recent years, according to US Census data (see chart), but the disparity that still exists can no longer be attributed to causes like the so-called pipeline factor (that women MBA’s, e.g., relatively new cohorts, need more time to assimilate into the system):

A recent study in Catalyst dispels the pipeline and other myths that would explain male-female, gender-income disparity. Worse, the Catalyst study shows that playing louder, faster, or more power chords isn’t likely to increase the struggling female guitarist’s chances to enter the ranks of the top 100. According to the Catalyst study, women fall behind men in job advancement regardless of what promotional strategies the woman employs. In other words, these are women who know how to play the game, but playing the same chords as the men play doesn’t seem to garner the same audience. A 2010 Catalyst census shows that 92% of Fortune 500 company top earners are men, and only 14% of women are executive officers. So what’s a poor girl to do? To make matters worse yet, the Atlantic on-line just posted that “68% of the sons of the top 1% work at their Dad’s company.” The Atlantic post links to a recent study, “The Intergenerational Transmission of Employers,” and a blog post by Miles Corak, one of the study’s authors. Says Corak, of the elite nepotism, one with harmful potential, in the conclusion to his blog post: “If the rich leverage economic power to gain political power they can also skew broader public policy choices—from the tax system to the education system—to the benefit of their offspring. This will surely start eroding the belief that labour markets are fair, and that anyone can aspire to the top.”

And the ladies were not the only slighted guitarists omitted from the RS list. We would be remiss if we did not augment the argument with some of our favorite male guitarist no-shows: Gabor Szabo, Bill Frisell, John Williams, Leo Brouwer, Herb Ellis, David Rawlings, Leo Kottke.

No doubt you have your own greatest list: “God bless the child that’s got his own.”

Related: Women Under the Glass Ceiling: Parity and Power in the Pipeline