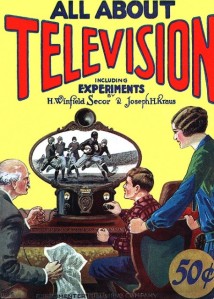 McLuhan explains that the printing press created the individual, while television returns us to the tribal. No one’s on the margins watching television. You’re either in or you’re out, and games on television up the ante. “Games are popular art, collective, social reactions to the main drive or action of any culture” (1964, p. 208). Art is magic, transference, transubstantiation of the base metals of our daily lives into something beyond us, beyond the daily bread and the process that brings bread to the table. Literacy, McLuhan argued, created individual point of view, eliminating the tribal view that was all inclusive. Games return individuals to a tribal mode, creating a “situation contrived to permit simultaneous participation of many people in some significant pattern of their own corporate lives” (p. 216). Games on television are a nonliterate art form.

Turn on the TV, put the game on, and join the crowd. The TV screen is a mosaic of dots compelling audience participation: no knitting, no reading – everyone’s paying attention. TV works like a cartoon drawing; the viewer sees only a few of the many dots and must fill in the rest. TV is all at once and ongoing, unlike a book, which is sequential, like a long train ride, each passenger in a private, individual seat. TV performs its violence by capturing the viewer, who can not turn away.

McLuhan explains why baseball is individual and literate and a poor game to watch on TV while football is tribal and all inclusive and trumps baseball as a TV sport: “The characteristic mode of the baseball game is that it features one-thing-at-a-time. It is a lineal, expansive game which, like golf, is perfectly adapted to the outlook of an individualist and inner-directed society. Timing and waiting are of the essence, with the entire field in suspense waiting upon  the performance of a single player. By contrast, football, basketball, and ice hockey are games in which many events occur simultaneously, with the entire team involved at the same time. With the advent of TV, such isolation of the individual performance as occurs in baseball became unacceptable” (p. 284). The players in football are non-specialists (compared to the players in baseball). The team moves at once, together, in the same direction. All the players are viewed on the screen at once – this is almost impossible to do with a TV camera at a baseball game.

Baseball is a snooze on television, while football is an ecstatic TV game. Baseball is slow, the game of languorous summer, like reading a book. The reader can put the book down and pick it up again later; there’s no clock, so there’s no need for an official time out. In baseball offense, the players sit in the darkened dugout like unread pages in a book, while on the TV gridiron the all inclusiveness is all involving as both offense and defense assume their roles simultaneously.