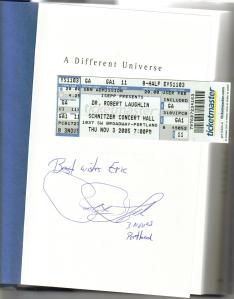 We saw Robert B. Laughlin lecture in Portland in 2005. It was Eric’s idea. He was taking a high school physics class, and there was a free ticket and extra credit in the wings, so we tagged along, always interested in what the physicists are up to.

The hall was packed. On the stage was a podium and an overhead projector. We had expected high tech Excel files pasted into a slick PowerPoint. Instead, we got a speaker and cartoon drawings on the overhead. And it was brilliant (in the Roddy Doyle sense of the word). Laughlin was funny, accessible, engaging (a Q&A followed the lecture), humble, generous, challenging. Then the Nobel prize winning physicist sat in the lobby selling and signing his book: A Different Universe: Reinventing Physics from the Bottom Down.

Our brain, an old dog versed in verse, struggled a bit in parts of the lecture, wanted to chase a Frisbee in the park, get out and smell some dirt, so we looked forward to sharing the book with Eric and learning more about the universe. Eric had Laughlin sign the book; his signature looks like a nebula.

What can science tell us about life? In his preface to the book, Laughlin says, “Seeing our understanding of nature as a mathematical construction has fundamentally different implications from seeing it as an empirical synthesis. One view identifies us as masters of the universe; the other identifies the universe as the master of us…At its core the matter is not scientific at all but concerns one’s sense of self and place in the world.” One of these views he explains with a reference to John Horgan’s The End of Science, “in which he [Horgan] argues that all fundamental things are now known and there is nothing left for us to do but fill in details.”

That is the view of the brain taken by some of today’s neuroscientists, a view that has the seemingly infallible protection of the scientific method. Yet Laughlin moves on to describe a different view, “that all physical law we know about has collective origins, not just some of it. In other words, the distinction between fundamental laws and the laws descending from them is a myth, as is the idea of mastery of the universe through mathematics alone.” This is an untamed elephant in the science lab. And we’re only in the preface.

Emergence is Laughlin’s theme: “…human behavior resembles nature because it is part of nature and ruled by the same laws as everything else…we resemble primitive things because we are made of them – not because we have humanized them or controlled them with our minds. The parallels between organization of a life and organization of electrons are not an accident or a delusion, but physics” (201).

Laughlin likes quotes; they help him move his conversation forward. This one opens his book: “Not only is the universe stranger than we imagine, it is stranger than we can imagine” (Sir Arthur Eddington). This one opens the last chapter of the book: “A human being should be able to change a diaper, plan an invasion, butcher a hog, conn a ship, design a building, write a sonnet, balance accounts, build a wall, set a bone, comfort the dying, take orders, give orders, cooperate, act alone, solve equations, analyze a new problem, pitch manure, program a computer, cook a tasty meal, fight efficiently, die gallantly. Specialization is for insects” (R. A. Heinlein).

Juxtaposition to synthesize varying points of view casts things in new light. In the chapter “Picnic Table in the Sun,” Laughlin, describing some physicists’ conversation, says, “At any rate, by noon nobody’s brain would hold any more…,” and they move off to an outdoor lunch.

We find the physicists’ full brains hopeful; it suggests the need to digest, sleep, and let go – a need we all feel, regardless of the relative size of our brain. Here in this particular spot in the universe it’s morning, and we are thinking of some scrambled eggs, toast, and coffee. Then we’ll take a walk in the sun, and if we’re lucky, our brain will forget about itself, becoming just another part of us, no more, no less, another part of the universe.