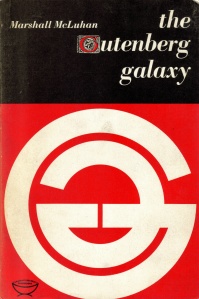 Madison Avenue was first to show interest in McLuhan’s ideas. What were those ideas? He did not argue an aesthetic, as Nicholas Carr seems to want. McLuhan would certainly miss books, if change came to that. Every new technology alters the sensorium. Is Google making us stupid? Who’s us? What is stupid? Google’s effects are more political than aesthetical: Blessed are the dull for they shall watch television; blessed are the sharp, for they also shall watch television. Blessed are the stupid, for they shall google.

And what of the internet? McLuhan would argue that the internet has not yet invented its content. Every new technology fills with the content of the old; Google’s book project is the reductio ad absurdum of this McLuhan tenet. If the printing press resulted in nationalism, marginal man, individualism, privacy, what will the effects of the internet be? Certainly to reinforce the concept of individualism, but without the privacy (facebook, blogging) – truly a global village, a political effect.